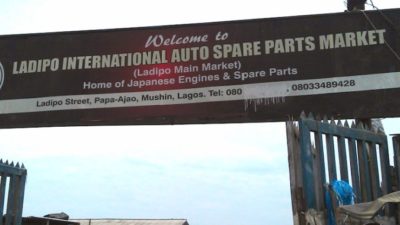 The long awaited rehabilitation of the crowded Ladipo market is set to come to reality as the Lagos State Government extended the reconstruction of Oshodi-Airport road to the market.

The government has embarked on the reconstruction of the road as part of its efforts to turn the state into a mega city and to also create conducive environment for businesses to thrive.

Before now, Ladipo market had lacked good facilities such as good road despite being one of the largest spare parts markets in the state.

The market, which had been left unrepaired for a long time, has finally caught the attention of Lagos State Governor, Akinwunmi Ambode, who said the rehabilitation of the market would be carried out alongside the reconstruction of Airport road.

According to the governor, the rehabilitation of the market would also extend to its environs. Ambode said, “The ongoing expansion and reconstruction of the Oshodi – International Airport road will be expanded to include parts of the Oshodi-Apapa expressway,  Ladipo International market onward to the Guardian press. “We remain committed that no segment of our state,  irrespective of  colour, race, faith and status will be left behind.”

Meanwhile, more buildings have been demolished at Oshodi market along airport road axis for expansion of the road. The demolition also extended to  Charity, 7&8 busstop, Ajao Estate up to Muritala International Airport.

Although the traders who were affected by the demolition expressed grief when the officials  of Lagos Taskforce embarked on the exercise, they admitted that they were earlier informed but were not given a specific date for the commencement of the exercise, saying this afforded them little time to prepare for relocation.

Some of the affected traders who spoke with Echonews said they were able to pack their wares before the commencement of the demolition.

However, the Lagos State Taskforce Chairman, Olayinka Egbeyemi, said the demolition of the building was necessary for the expansion of the road.