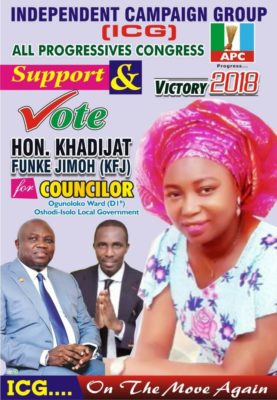 Celebration galore at Oshodi-Isolo Local Government Secretariat as the All Progressive Congress (APC) members trooped out en mass to celebrate the victory of Hon. Kadijat Funke Jimoh in the just concluded councillorship bye-election that took place in Ogunoloko,area of Oshodi.

Prior to the election, the Lagos State Independent Electoral Commission (LASIEC) had cleared two parties to participation in the councillorship bye election schedule for Saturday, March 24, 2018.

The Commission’s Director of Public Affairs, Oladapo Olatunde mentioned All Progressive Congress and People’s Democratic Party to have been the only parties that showed interest in the election.

While the LASIEC Chairman, Justice Ayodele Phillips promised that the Commission would do its best to make the election credible. 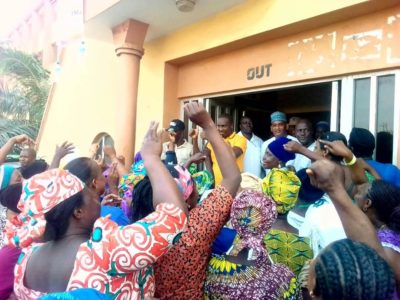 Consequently, APC members celebrated their candidate, Hon. Khadijat Funke Jimoh, as LASIEC declared her winner of the bye election conducted with the total votes of 2208 against PDP with 343 votes.

He also reminded them that the election was a call to duty so as to start preparing for the 2019 election.

On this note, he congratulated the councilor elect from Ogunoloko ward, wishing her success and hitch free tenure as she represents her ward at the legislative arm.

In the same vein, the Lagos State APC Secretary, Hon. Akeem Bamgbala, congratulated the party and the people of Ogunoloko ward for electoral success recorded which he referred as liberation of Oshodi and also a validity that Oshodi belongs to the progressive.