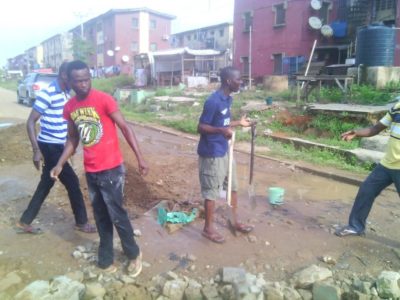 ”Our roads are terrible, an eyesore to the community. The governments has taken their eyes off Jakande Estate in terms of rehabilitation, despite lots of damaging things been done to our people.

“We have been silent over the issue of roads and other issues affecting us in the Estate because we have made our grievances known to the government without reply. It’s obvious we have been abandoned in Ejigbo LCDA.”

These and many more were reactions from the residents, particularly the youths of Jakande Estate, Ejigbo who have, according to them, taken into their hands the development of the community after lots of calls made to the government without any positive result. 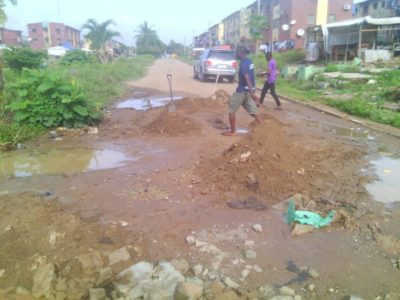 The youths in the area trooped out last Saturday to embark on self-repair of one of the deplorable roads situated at Nepa Junction with the motive of putting it in good condition for motorists and pedestrians.

According to them, the roads in need of rejuvenation are many and causing discomforts to the residents of the area.

Furthermore, the inhabitants of the community noted that the business activities in the area have been put on hold due to condition of the road hindering commercial busses to bring goods into the community.

They claimed that the issue of security has also been hampered by the issue of the deplorable roads which can be seen at bus stops like Iyana Isheri, Double Star, Oja, Moshalashi, Nepa, Ile Iwe and Junction, to mention few.

One of the conveners of the movement, Mr. Yusuf Adeyemi, stated that the situation of bad roads has been there since he relocated to the Estate.

“It has been a serious issue in the Estate. The situation of our roads is bad. All roads in the Estate are bad, no road here is good at all. We deemed it fit to write to our council Chairman telling him about it but we got no reply.

“Last week Thursday, we made a reminder also through a letter about the situation of things, asking of his plans towards our roads. In fact, we told him that we would be voluntarily doing the roads on Saturday and requested for his assistance in form of a machine, a grinder that can grade the places we would be able to touch before the end of the month. Whether he is still coming, we don’t know because today is just seventh.”

Adeyemi irately told Echonews that there were 28 roads shortlisted by the council for reconstruction but none of the roads in Jakande Estate was included.

“We saw the list of the roads to be either constructed or rehabilitated in Ejigbo LCDA but none of the roads here in the Estate is in the list despite the condition of our entire roads. But we the youths wouldn’t want to wait forever before something is done, and that’s why we came out on Saturdays as early as 7pm to begin our work.

“Initially, we were few. But sooner than we expected, people started coming out and we packed rubbles and filled the road at Nepa Junction just to make it motorable.”

He hinted on the negative effects the bad roads have on residents of the community, mostly in the aspect of transportation.

“We were moving around the night before the commencement day of the exercise looking at where to start and we saw a commercial trycyclitst telling an old woman who boarded his bike home that he won’t get to her residence simply because of the condition of the road.

Ifeoluwa Enobabo, another resident lamented they were doing the responsibility of the government, adding that they were also using it as a continuous way of telling the government what to do using the media.

Enobabo however summoned all youths to come out during the subsequent road rehabilitation exercise and also to know it’s a charitable work since it’s not their duty so as to make it useful for motorists and pedestrians in their daily activities.

Comrade Aderogba Adedoyin, another resident in the area solicited support of the government to assist the youths who according to him have come out with a fantastic plan on the roads and also executing those plans.

“We are not berating the government. We are trying to tell them to have an eye on this community so as to see that lots of things are to be done.

“The state of our roads has even cut across security issues.”

“Before now, those who go far for work get buses to their places of work at early hours. But now they walk to the gate and some use the commercial tricycle which has resulted in lots of robbery here in the Estate.

“This Estate happened to be the good work of Baba Lateef Jakande of which I’m a beneficiary also. We have aged people here who are concerned about the use of roads. I can tell you there is no major way in the Estate that is passable now. It’s not acceptable when friends and relatives come in here and they go back with a sort of damaged parts on their cars. That’s why the youths have seen it a thing to do in terms of just making these roads motorable.

“It’s not easy for the youths making this happen singlehandedly because of the expenses that go in line with it because our society is swallowed in the hands of unemployment. But they believe that doing this would get the attention of the local council to assist in making it a reality.”