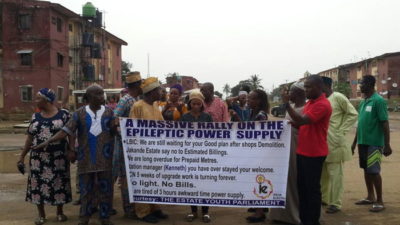 The residents of Jakande Estate, Oke Afa in Ejigbo Local Council Development Area (LCDA) today trooped out in numbers to protest and air their grievances over the persistent epileptic power supply in the area, which was not in tandem with the high bills given to the consumers, while making intense clamour for prepaid meters as the only way out of their situation.

According to them, particularly the artisans, the little or no power supply has led to a decline in their daily activities, claiming that they have been larger percentage of their profits on purchase of petrol, while still being charged high electricity bill. 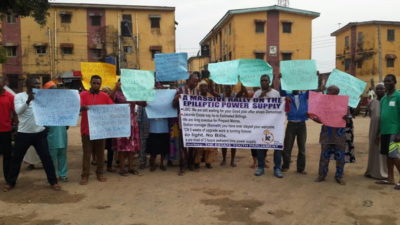 The residents also made mention of the two months period requested by the Ikeja Electric to make repairs on their equipments which according to them has been the reason behind the decline in power supply within the area, noting that the situation has remained unchanged after the period had lapsed long ago.

Several other complaints were made by the residents of the area, which were reiterated by one of the conveners of the rally, Yusuf Adeyemi who spoke with Echonews.  He said, “Actually in the estate, our light has been so bad. In the last seven to eight years now, we hardly have light during night hours. There is a rumour we had that the black market dealers in the area are linking up with the electricity handlers not to give us light here.

“There was a time it (supply) came down like this, sometime in 2016 and the youths came out to fight against the situation. During that time, we met with the PHCN officials and a light shedding plan was given to us as the only option if we wanted light in our area. We initially disagreed to the plan but later on, we realised we had to accept the loading shed and during that time, there was a positive difference in the supply.

“We were made to realise back then that the shedding of light was due to the shops we had here in the estate. They claimed that there were too many shops here which consumed much more of the light. Later on, the shops got demolished sometime around November 2016 and it was expected that there would be an increase in the supply. We went to them and told them that our shops were gone and we wanted our light back without it been shed. During that time, the light was still okay but all of a sudden, it became really bad. Since then, we decided to keep things to ourselves and see what happens next but there hasn’t been any changes.”

He continued, “Recently, they told us that there was to be a repairing process of their power station in Ejigbo in an attempt to upgrade their power plant. It was a five weeks request from the Ikeja Electric to do this and we were thinking there would be changes after their time request. The work started on the 16th of October last year and expectedly, it should finish last November but when the time was nearing its end, they requested for another two weeks. But unfortunately, as we speak, today is the 11th of February, 2018, they are yet to finish the work.  “This shows a lack of competence on the part of PHCN as an organization because it doesn’t sound well for the organization to have failed to do the job at the lapse of two different requested periods.”
Explaining further, Adeyemi said they were at Alausa some weeks back to also show their dissatisfaction over the situation where they were told to be calm that everything would be settled but nothing has been done hitherto.

He said that though they were promised that the job would be finished on the 31st of March, they would not fold their arms knowing that the promise would again fail; that was why they had come out through the media to show our grievances.

An artisan, Abdulazeez Dada, who owns a saloon in the area also relayed how the low level of power supply has affected his business.  According to him, they were ready to pay their electricity bills as and when due as they spent more of their earnings on petrol, saying electricity was a key factor to development of small and medium enterprises (SMEs), which the government has been advocating. Dada debunked the rumour that people of the area owed huge electricity bill as one of the excuses by the power distributor for the current situation of power in the area, saying that the company could have cut off the debtors from their service.

Another resident in the area, Chioma Akalonu was bemused while learning about the provision of power in close communities to Jakande Estate.  She remarked, “I had a visitor who just left my place now residing in Isolo. He disclosed to me that there is an adequate supply of electricity in her area. When we hear of things like this, it appears it is a wilful act by the Power officials not to provide light in our area. We are still trying to pull ourselves together as to the shops demolished and now the issue of electricity. We all have our businesses, most of them requiring electricity. We call on the Lagos State government to help us out of this situation.”

Oluyonbo Abodunrin, a resident in the area, in her own assertion wanted a positive forum between the community residents and the power officials so as to amicably have a lasting solution to the problem. Like other correspondents, she added her grievance over the situation. “We want to know what really happening. The Ikeja Electric should come out and tell us. We want to know why we are being sidelined, because we know other people are enjoying light and we are paying. Well, I don’t know about others but I pay my bills. All we need is for them to tell us what is happening maybe there would be a positive discussion from that. ”

The residents as at the time of this report have chosen to file out for subsequent rallies on Sundays, irately disclosing that it is either the provision of prepaid meters or no payment of bills.