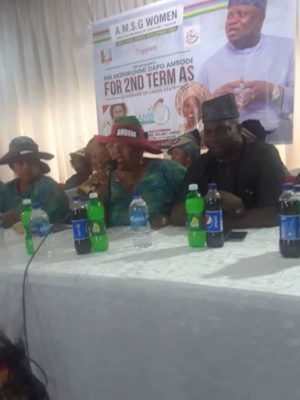 The launch which is the fourth in the series of campaign platform in Isolo for Gov. Ambode’s second term bid drew a mammoth crowd to CLOU Event Centre including women politicians, artisans and market women from the seven political wards of the council area.

The Director of AMSG, Hon. (Mrs.) Bolanle Akinyemi-Obe, who incidentally is the Executive Chairperson of Coker/ Aguda LCDA led other members of her team and was welcome by the First Lady of Isolo LCDA, Alhaja Ibironke Olaleye alongside her husband, Hon. Shamsudeen Abiodun Olaleye, the Secretary to the Local Government (SLG) and the Iyaloja-General, Chief (Mrs.) Dosunmu as well as artisans and market women. 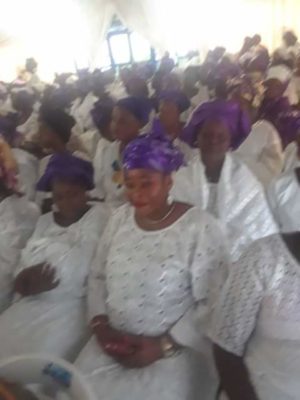 In her welcome address, Alhaja Olaleye welcomed the AMSG team to Isolo which according to her is already toeing the line of Gov. Ambode’s re-election, stressing that there is no opposition to Gov. Ambode’s ambition for second term in office.

Hon. (Mrs) Akinyemi-Obe, who expressed delight over the warm reception accorded her and her team by Isolo LCDA, stated that the team’s visit to Isolo was to garner support for Gov. Ambode’s second term in office.

Akinyemi-Obe said she was convinced that Isolo would deliver total votes for Ambode. 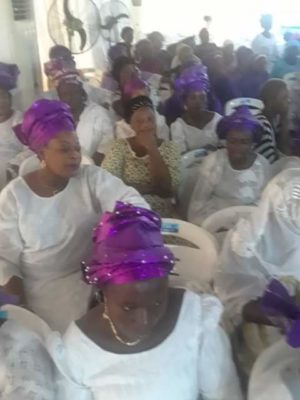 She however enjoined Isolo women to register and collect their Permanent Voters Card (PVC).

“That is the only ticket with which you can vote Ambode for a second term in office,” she infirmed.

According to her, over one million PVC are unclaimed in Oshodi/Isolo Local Government, noting that women have a bigger role to play in election.

“As women, we have the strongest voting power and there is no one who gets elected to positions without our support. I am now calling on all of us to come out enmass on Election Day to vote for our amiable governor for the second term.”

Responding, the chief host of the event, the council chairman, Hon. Olaleye stated emphatically that Isolo bode well with anything that has to do with the governor, stressing that the current launching of AMSG was the fourth in the series of launchings in support of Gov. Ambode’s re-election.

“This is the fourth time Ambode’s re-election project is being launched here in Isolo. You will recall we launched Itesiwaju Ipinle Eko Foundation here in Isolo on 25th of December 2017. We followed up with an official endorsement at Isolo LCDA. Then we also aligned with Akin Ambode Support Group (AASG) led by Mrs. Laide Johnson. Then with this one, we are well at home with Gov. Ambode because of his love for us in Isolo.

“We have massively mobilized our people especially women. Isolo women are tested and trusted and can always deliver during elections. I know them; they know me and I can always vouch for them anyday,” the council boss said.

Over 500 women invited from across the seven wards of the council area were all cladded in white and purple colour, singing the praises of Gov. Ambode in a colourful atmosphere that saw all singing and dancing.