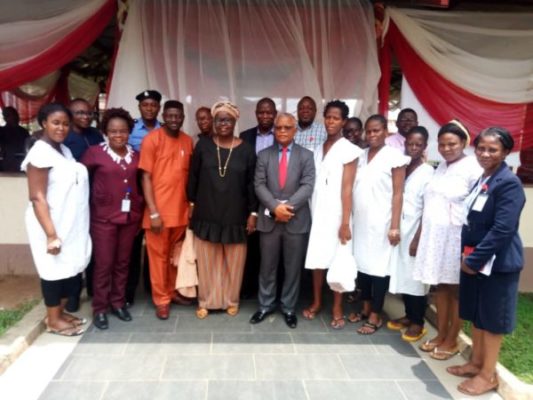 Between 2016 and 2019, a total number of 776,445 patients with different ailments were treated at the General Hospital, Isolo, Echonews gathered.

The figure represents 750,997 out-patients and 15,448 in-patients treated for malaria, tuberculosis, infections, eye diseases, influenza and other viruses, as well as prenatal/postnatal care, surgeries, and other different illnesses.

This feat was achieved according to the Medical Director of Isolo General Hospital, Dr. Godwin Akhabhoa, despite some challenges rocking the operation of the hospital.

Speaking during a Service Charter Stakeholders meeting held at the hospital premises recently, Akhabhoa explained that the hospital management under his leadership has been able to provide facilities including provision of phototherapy machines, motorised table at the eye clinic, installation of industrial UPS in the laboratories, partial renovation of some departments in the hospital which have so far enhanced the productivity of the hospital.

All these, he said, no doubt have earned the hospital the compliments and accolades it has so far received.

He also disclosed that the hospital is used as a learning guide on service delivery by officials of Ogun State Ministry of Health who come with its officials to understudy the outstanding services of the hospital.

The quarterly meeting where all stakeholders which comprise internal and external publics meet to review the activities of the hospital as necessitated by the Service Charter Initiative had in attendance the Permanent Secretary in the Lagos State Health Service Commission (HSC), Mr. Segun Adeniji, Commissioner I of the HSC, Dr. Mrs. Monsurat Oyekan, Service Improvement Officer of  Service Charter Initiative, Dr. Joan Oluyemi, the Director for Creativity and Innovation from the Office of Transformation, Creativity and Innovation (OTCI), Mrs. Toyin Ademuyiwa, Heads of various departments in the hospitals as well as patients, police officers, representatives of the National Union of Road Transport Workers (NURTW) and market leaders representatives.

Akhabhoa, while giving a comprehensive report of the hospital activities dated back to 2016 till date, reiterated that Isolo General Hospital had not only attended to almost a million clients but had received many commendations than complaints, saying that regardless of the floods of patients on regular basis, the medical staffs find pleasure in delivering their duties.

According to him, “Between year 2016 and now, we’ve attended to 750,997 out-patients and 15,448 in-patients. Our statistics also shows that there is a great increase in the number of patients who prefer our services. In our feedback log, we have more of commendations than complaints. It is not because we are perfect; it is because we have a good team here that is ready to work for the patients.”

He however brought it to the awareness of the government representatives that the hospital which has plan to celebrate its 45 years of operation next year needs government’s intervention in terms of renovation of some buildings and provision of more health amenities.

He said: “We employ what is called management and exemplary leadership here in Isolo General Hospital. Management is the ability to minimise the impact of challenges and maximise the advantages therein. We’ve been able to do so in order to prevent little problems from becoming challenges but, we need the government to proactively look into these areas where the hospital needs intervention.

“Since the hospital was established, it hasn’t been renovated for once, some of the buildings are getting dilapidated. The last time renovations were done in some general hospitals, Isolo was totally left out.

“We need backup generator. Right now, we only have a 500kva generator which consumes 22,000 liters of diesel every month. We need generator that can take care of critical areas when we have to downsize energy supply. The hospital doesn’t have a functional utility vehicle at the moment. In some departments, manpower is a challenge and we need more security personnel.”

Responding, the Permanent Secretary, Mr. Segun Adeniji, who was making a maiden appearance in the hospital, expressed his admiration for the great works and achievements recorded by the hospital management, stressing that “the result of hard work is more work.”

He however stated that the inadequacy of facilities in some government owned service centres is caused by the increase rate of immigrants into the state on daily basis as he assured that the government would look into the needs mentioned.

“All other needs have been noted, we have taken note of them especially the staffing. It is our duty in Health Service Commission to ensure that we provide adequate service to all secondary facilities and that will be done very soon.”

She therefore encouraged more of that as she stated that by September 2019, the department would look into the implemented creativity as suggested by the staff, promising to arrange deserving rewards for them.

“We are happy because of the achievements of the MD. So far, Isolo has two of the best creativity ambassadors in Lagos State.”

“In our independent survey, service delivery and client satisfaction have greatly improved in Isolo General Hospital same as staff welfare, we are impressed.

Mrs. Balikis Wahab, a stakeholder whose son was treated for tuberculosis in the hospital confessed that she was overwhelmed with joy by the way a nurse attended to her son the day she brought him.

She explained: “We came all the way from Egbeda. The interesting thing is that, whenever I tried to appreciate her with tokens she rejected it. If peradventure I was asked to take my son to another hospital, we wouldn’t go. Isolo General Hospital is the best.”

“I used to have this prejudice that health service providers in general hospitals are nonchalant, careless and irresponsible and this belief made me had my first child birth in private hospital. I decided to try Isolo General Hospital for the birth of my second child and I was so surprised by the manner of health service and attention I received and I’ve vowed to have my next child births in the hospital.”