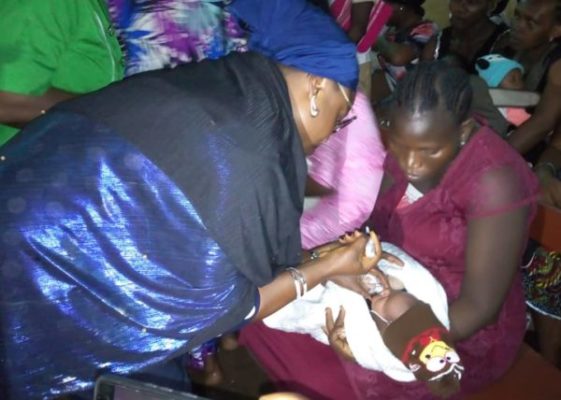 Wife of the Lagos State Governor, Akinwumi Ambode, and the Chairperson of Ejigbo Local Council Development Area (LCDA), Mrs. Fatimah Abiodun Bello have enjoined mothers to ensure their children are vaccinated against Polio, saying the exercise is not a mission to reduce the population of the country.

Speaking during the Flag-off of the Polio Outbreak Response Campaign, held at the Iyana Ejigbo Primary Health Centre, Ambode, who was represented by the Lagos State Technical Facilitator for Immunisation, Mrs. Williams, said no government would kill its citizens, adding that vaccination and Immunisation have greatly helped to reduce the rate of infant mortality.

While addressing the audience, the Chairperson of Ejigbo LCDA, Mrs. Fatimah Bello, emphasised the need to take proper care of children, saying their wellbeing is paramount to the country.

Noting that the exercise was part of the efforts to prevent paralysis of babies in Ejigbo LCDA, Bello advised the parents to attend to the Polio officers well whenever they come to their environment.

Alhaja Bello, who kicked off the exercise by administering Polio vaccines to some babies feted the children with gifts to commemorate the flag-off which was well attended by representatives of UNICEF Management Support Team and  National Primary Health Care Development Agency (NPHCDA).

The first round of Polio Vaccination exercise was carried out in Ejigbo between May 18, 2019 and May 21 while three other rounds are slated to be conducted in June, July and August respectively.

The campaign against Polio, according to her, was necessitated by ithe recent discovery of cases in Mushin and Makoko, noting that the event was holding simultaneously in all LGAs and LCDAs across Lagos State.