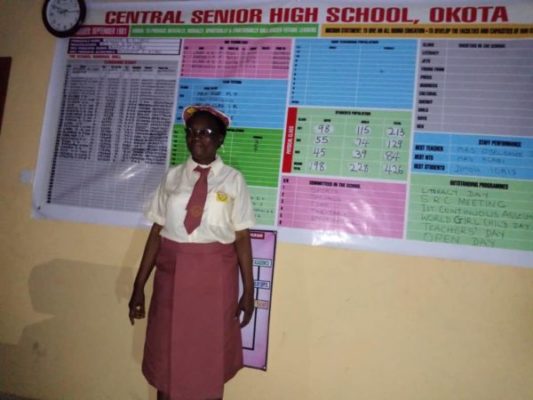 The former Principal of Central Senior High School, Okota, Mrs. Oyindamola Opanuga could not hide her joy as she retired from Lagos State teaching service last week, saying she was a fulfilled teacher.

Opanuga had on Monday May 20, 2019 quit the Lagos State Teaching Service Commission after 35 years of dedicated service, which took her to the higher position of Principal.

While celebrating her retirement, the former principal stunned the whole school community with her unusual dress in the school uniform to conduct the assembly as a principal for the last time.

The pupils and teachers were emotional as they found it hard to conceive the reality of her retirement.

Opanuga started her teaching career in 1985 at Ivory Grammar School, Ibeshe and had taught in various other schools before joining Central Senior High School, Okota in 2018.

According to her, “Penning down with this feeling of boundless happiness and love that I’ve received from colleagues and students means fulfilment to me, my mind is convinced that I’ve done so well. 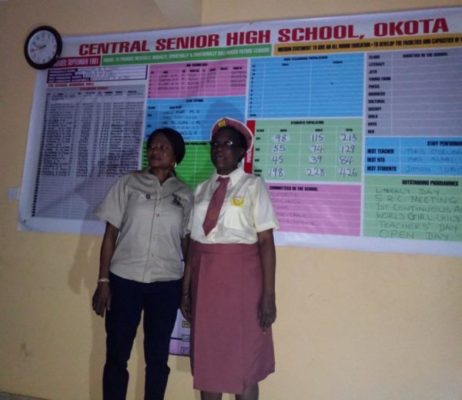 The new principal with the outgoing principal

“When I entered the service in 1985, what came to my mind was how I would be able to cope in the profession but to God be the glory I sailed through. The first school I taught was Ivory Grammar School, Ibeshe. I’ve been to several other schools before the service brought me to Central Senior High School. Truth be told, the beginning was dauntingly narrow but, I give glory to God today. 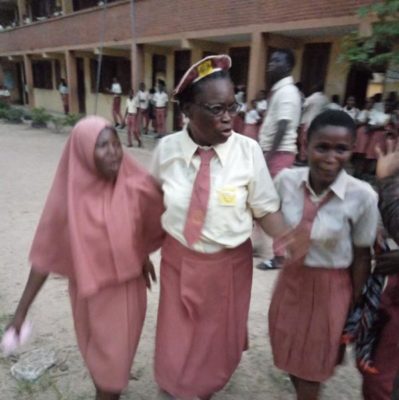 “I became the principal here on July 10, 2018. Indeed the task seemed enormous but hard work; diligence and God’s wisdom were the major factors. My good relationship with the teachers and students played a great role towards earning these celebrated achievements today.”

Speaking about her achievements, Opanuga claimed that she has raised the standards of students’ performance in academic activities to 80 per cent, far more than how she met it when she came to the school.

“When I got here the performance of the students was so low, it wasn’t such that could give a principal happiness, but with the assistance of the Vice Principals and the indefatigable teachers, we were able to raise the academic standards to 80 per cent. I also raised the standards of clubs and society; I launched the Girls Guide, the Boys’ Scout, and the Sheriff Guard to make sure the students were kept away from societal vices. The achievements are numerous but all glory belongs to God.”

She said she would miss the company of teachers and pupils and expresse3 joy to a capable and reliable successor in person of Mrs. Bola Balogun who has since resumed as the principal of the school.

She also appreciated the state government, for enabling her to acquire Bachelor’s and Master’s degrees on the job.