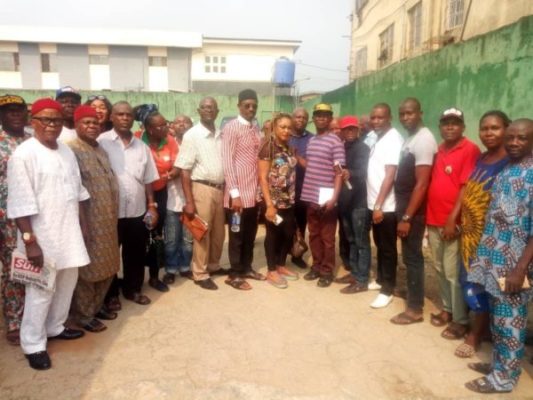 In a bid to avert the recurrence of 2015 misfortune suffered by the All Progressive Congress (APC) in Isolo, which emanated from intra-ethnic angle, the Igbo groups have put aside their differences as they collectively work towards victory for the party in 2019.

This came following the end of supremacy tussle that has soured the party in Isolo.

The Isolo chapter of Igbo United Political Coalition has, however, called on the seceding factions to embrace unity which the tribe is known for in order to ensure victory at the polls on Saturday, February 16 and Saturday, March 2, 2019.

The Chairman of the group who doubles as the councillor representing Okota Ward of the Council Area, Hon. Osondu Kanayo explained how misunderstanding and misconception of political benefits tore the group apart for long which has resulted to the emergence of over four groups.

He, however, subscribed to the fact that a house divided against itself has little chance of winning a battle and that has been the reason for the reconciliatory meeting.

In his words: “Igbo United Political Coalition has been in existence since 2007. The structure is right from the state as it was created by APC National Leader, Asiwaju Bola Ahmed Tinubu, when he was the governor of the state. However, it was midwifed to Isolo by Chief Henry Ajomale when he was the state Chairman.

“The group had since metamorphosed and as well proliferated as many people had seceded to create more than four other groups due to misunderstanding and faulting that the leaders of the group are not fighting for the benefit of all, the act that was seen as prejudice.

“We understand that there has been conflict in the past and we’ve come to realize the great need to clear the misunderstanding and settle our differences.”

“The number of Igbo in this council area is quite high and that’s why the party looks up to us as a group because the party felt that If the Igbos are in disunity everything might not augur well as intended and this is an important reason why the coalition is germane. We can’t afford to go into the election in factions, in oneness we are going to ensure victory for the party at the polls,” he emphasised.

However, he established that the leaders of the factions have put aside their differences and promised allegiance to the party and ensure all candidates fielded by the party emerge victorious at the poll especially Igbo’s very own Hon. Jude Idimogu who is not finding it very easy to win the hearts of some members who still believes he only defected to seek re-election with the ruling party.