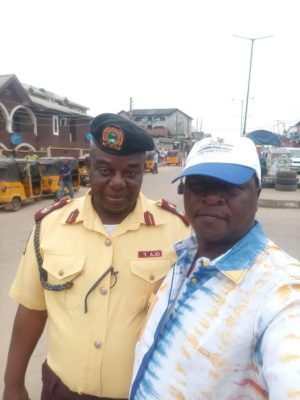 The newly appointed Assistant Commander of the Lagos State Traffic Management Authority (LASTMA) in Ejigbo, Tayo Ola, has disclosed that he needs to study his new working environment and get himself familiar with the vicinity to be effective in the discharge of his job.

Ola, who was deployed from his former job as the Head of Training Officer in Oshodi to take a new challenge in the field to control vehicular movement on the roads would also need to be flexible though he had done the job before, his last working experience was in the office.

He said: “I have field work experience in Oshodi, PWD, Cele Expressway, Ikeja, Bariga, Apapa and I can state gridlock places within these areas without a blink of an eye, all I have to do now is to get myself acclimatised with the new environments.”

According to him, the postings cut across all LASTMA officials that have been in a particular zone for long, to create good innovations and to share ideas experienced from different zones.

He said the promotional switch of duties from head of training officer which entails paper works in the office, training of new intakes and attending trainings to assistant commander who is to be on field works, ensuring free flow of traffics on the road demands environment mastering.

However, the three weeks old Ola in Ejigbo zone applauded the efforts of the LASTMA General Manager, Mr. Olawale Musa for making the system functional.