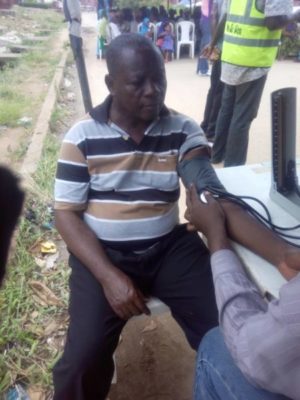 Following the free medical checkup organised for the residents of Jakande Estate by the Estate Youth Parliament (EYO), about 80 per cent of the over 120 people who participated in the programme was tested positive to hypertension.

The Health Officer from Lagos University Teaching Hospital (LUTH), Dr. Ismail, Hussein, who revealed the results of the test to the organisers, advised that the affected beneficiaries of the test should be informed of their status in order to ensure they follow the medical advices they were given so as to keep healthy living.

Meanwhile, the organisers of the programme stated that they were waiting for general doctor’s written report to inform the affected people are informed formally.

“We are waiting for the general doctor’s written report as he said 80 per cent of the people that came for the test are hypertensive and we need to ensure we continue to assist by engaging them in the things that will suppress the hypertension in their bodies.” 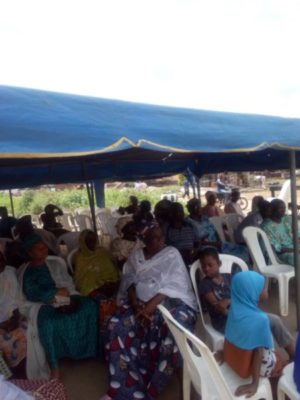 Speaking about the programme, the Chairman of EYP, Yusuff Adeyemi, said the idea of the free medical checkup was precipitated on the need to ascertain the health conditions of those who normally participated in the community works such as environmental sanitation, road rehabilitation and others.

He said, “The idea of organising a medical checkup for the residents came up as a result of our weekly activities on road maintenance work.

“A lot of people including the elders engage themselves in these road works and we thought of a way of appreciating them, that was how the secretary of Estate Youth Parliament a doctor in person of Giwa Idris and I agreed to organise it.

“We made consultations with fellow executive members and we decided to organise it not for only participating residents but also for other people that do not participate in our road work, tree planting, grass cutting and meeting activities among others.” 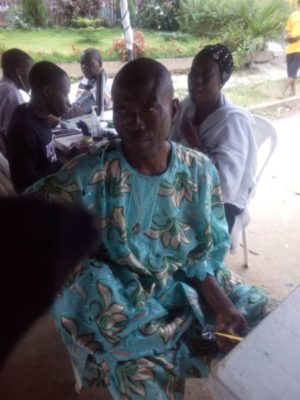 He said that after the agreement among executive members, the Secretary contacted his colleagues at LUTH to make it happen on Saturday, September the 1st.

He added that announcement was made to the public about the EYP free health program for the residents through flyers and social media.

“Plans were ongoing ahead of it. We made findings on expenses and we budgeted N30,000 though we ended up spending more for the programme as we earlier budgeted for 100 people but ended up attending to over 120 people.

“People came from several places and they were all checked by the Doctors and nurses who came from LUTH.

“People were placed on blood pressure, sugar level and dental tests as well as height and weight for everybody that came and most of the beneficiaries also went home with free drugs,” he said.

Meanwhile, the beneficiaries appreciated the organisers of the scheme, while charging the government to support the Estate Youth Parliament on such programmes that are beneficial bro the residents.