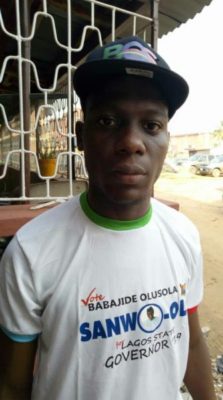 A group known as Idera De Support Group, has commended the former House of Representatives aspirant in Oshodi-Isolo Constituency II, Hon. Habeeb Anibaba for his support to the maiden edition of the All Progressive Congress (APC) Gold Cup soccer competition tagged “Play for Sanwo-Olu” held at Jakande Estate recently.

The Chairman of the group, Hon. Yusuf Adeyemi, confirmed that the erstwhile political aspirant has showered support to the group throughout the proceedings of the competition.

Speaking shortly after the tournament, Adeyemi said Anibaba, the group’s patron, has not only supported the football tournament but has also taken with keen interest, the youths in the community at heart.

“On behalf of our group, I want to really express my appreciation to Hon. Anibaba for his support through this soccer event. Our patron has been really wonderful in making sure that this event is a success.

“We really appreciate and thank him for his presence throughout the programme. It really shows that he is a lover of youths and I’m sure, with what everyone has witnessed today, my thoughts about him would also be the same as every other youth in the Estate.”

Explaining the rigour in organising such an event, Adeyemi said: “The proceedings have come and gone, and I thank God for that. I also want to thank my fellow excos for not tiring out in the process. I have to say it was very tasking to put up an event like this at the initial stage because it was not easy out all.

“I just want to thank all those who made sure the event took place and everyone who played one or two roles. The good thing is that it was held in a peaceful and lovely manner because we also made plans for that as well.”

He said the sport activity put up for the youths would liberate them from criminal activities in the society, adding that the event would be a stepping stone to their success as many great footballers have been discovered from Jankande Estate.

Also speaking, the Vice Chairman of the group, Hon. Kunle Lawal, who stated that the youths in the community could use the occasion to actively go into sports, urged them to imbibe the spirit of sportsmanship.

Lawal noted that more youths have embraced sports in Jakande Estate, which has curtailed illicit activities within the community.

He called on the influential people in Jakande Estate to give support to the group to see more achievements in the community, not just in sports but in other aspects of socio-economy.

The Treasurer of the group, Hon. Adeoti Soleye, who noted that the staying of the competition is a pleasure to her, charged the organizers of the sports competition to involve the female gender as they also form part of the youths in the society.