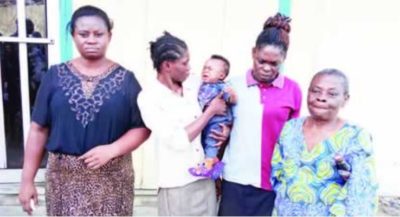 Operatives of the Zone 2 Police Command in Onikan, Lagos have started investigation into the alleged trafficking of a day old baby in Jakande Estate, Oke Afa Isolo after the report of a grandmother simply identified as Patience who was said to have conspired with her daughter, Blessing Emmanuel for the sale of the latter’s baby.

According to reports, Patience took the male infant from the mother on the day of the child’s delivery, and handed to one Ijeoma Okechukwu, who once lived in the same compound with Emmanuel with the aim of facilitating the sale in order to get money.

The trio planned to diffuse to the public that the child was dead due to the incessant enquiry about the whereabouts of the child’s corpse but Emmanuel was left with no other option than to open up to her church member, Comfort Ogwuebu, that the child was not dead but with Okechukwu who had earlier paid the sum of N250,000 for the sale.

In reaction to what Emmanuel said, Ogwuebu reportedly alerted Policemen who arrested the suspect and recovered the child.

During interrogation at the station, Ogwuebu, who is a lawyer, disclosed that she was initially told that the baby died from convulsion and epilepsy.

She said, “I assisted her family to secure accommodation in an uncompleted building beside my house on the estate. Sometime in October, Blessing’s brother announced that her sister had been delivered of a baby boy and I rejoiced with him. In the evening, I saw her mother and congratulated her. But she gave me a stare and left. I wondered if I said anything wrong.

“The next Sunday, I saw the daughter in church and apologised for not coming to greet the baby in the house. She said there was no baby. I asked if the baby died, but she said her mother took the baby from her. She said he was with her aunt who fed him with milk and water. I was suspicious.

“A week later, her mother called me and apologised for her reaction when I congratulated her. She said after Blessing was delivered of the baby, she (Blessing) was sick and even the baby was as small as a rat. She said the baby was so ill that he had to be taken to a herbal centre where they said he had epilepsy and convulsion. She said the baby had died from the illness.”

Ogwuebu said she was not satisfied with the explanation and prodded Blessing, who confessed that the baby was sold to Okechukwu.

Blessing said that she had earlier had a child for her boyfriend, simply identified as Valentine, who got her pregnant the second time. She said she resisted the pressure to abort the pregnancy because she didn’t want to die.

The Akwa Ibom State indigene said she was bothered about what would become of the baby when her mother told her that Okechuwku had agreed to take him after delivery.

She said, “I gave birth in the morning. She (Okechukwu) came at night and asked if my mother had discussed with me and I said yes. She said she would give me some money to start a business. She paid for the hospital bill.

“When we reached home, we called her and she said she had taken the baby to her sister’s house at Ejigbo. I went there twice to see my baby. The third time I wanted to go, I learnt that she had relocated to a new place, which I didn’t know. From that time, we only talked on the telephone.

“After about a week, she invited me to an eatery around the estate. There were two policemen with her. I asked where my baby was, but she said he was fine. She gave me N250,000 and asked me to sign a paper that I won’t disturb her in the future.”

Blessing said while part of the money was used to pay for the school fees of her other children, some were used to settle family debts. She said the rest of the money, which was kept in the kitchen, was stolen.

Her mother, Patience, 39, said she had been weighed down by the burden of caring for her three children and Blessing’s first child before she came home with a second unwanted pregnancy.

The widow said she saw Okechukwu’s intervention as an answer to prayer, adding that she thought her assistance would help the family out of poverty.

Okechukwu, 35, said she was only helping the family.

She noted that the matter got to the police because her former landlady, Ogwuebu, had scores to settle with her over the manner she left her house having moved in in January.

“It was even my landlady that initiated the whole thing. She said since the family could not take care of the baby that I could keep him. She was the one that discovered that the girl was pregnant.

“I was not interested in only the child, but in the welfare of the family. I am amazed that something I did in good faith could turn this way. The girl never told any policeman that her child was missing. I don’t get it that somebody wanted the police to resolve an issue because I refused to stay in a house that has 17 dogs and I breached some agreements?”

Asked if she was not driven by desperation to have a child after three years of marriage, the Anambra State indigene said she once had a child that died, adding that she was not desperate.

Badmus noted that the policemen alleged to have been involved in the illegal transaction had been identified and would be disciplined.

“We have recovered the baby and all the suspects are in custody. We are still unravelling what truly happened because we suspect that it is a long chain of trafficking.