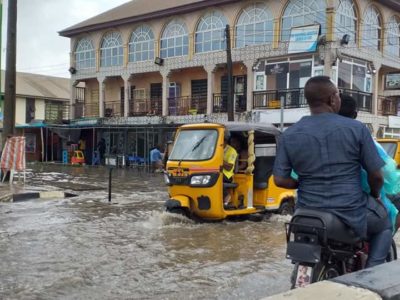 Local governments have pledged to support communities flooded by the rains in a bold move to manage a desperate situation.

More than 30 communities have been identified currently facing crisis in Oshodi-Isolo Local Government Area due to the heavy incessant downpours.

Many of the communities are being submerged following the continuous rains that have wreaked havocs on the residents and their properties worth millions of naira.

Since this year’s rainy season started, many properties have been destroyed while many people have been rendered homeless, although it has not been reported that any life was claimed by the flood, ECHONEWS gathered that properties including wares of traders in the affected areas were destroyed.

Two weeks ago, a woman was dragged to Isolo community by flood and was rescued by the local council government.

Apart from few communities that are swampy, the causes of the flood and its inherent disasters as gathered by ECHONEWS include lack of good drainage system, indiscriminate waste disposal, improper town planning as well as downward slope in some areas.

In Ejigbo, about seven communities have been covered by the deluge, putting residents in fear of dangers any time it rains.

The Community Development Associations (CDAs) of the areas have teamed up and approached the Chairman of the Local Council Development Area, Hon. Monsurudeen Bello who promised to go round the affected communities for inspection on Tuesday July 16, 2019 in order to find palliative measure to the disaster while waiting for the state government’s intervention. 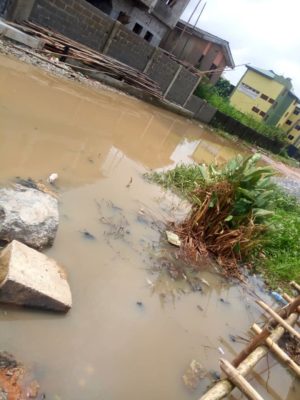 ECHONEWS survey of the areas revealed that the major challenge causing uncontrolled flood in those communities is blockage of canal at Fasehun Bridge in Promise land community.

He explained that the drainage system in the street was not well constructed as it didn’t flow the water to the right direction, causing stagnant water which later overflew to the street and compounds, destroying properties in many houses.

He recalled the local government under Hon. Kehinde Bamigbeta had tried on the street, while the current chairman, Hon. Monsurudeen Obe has also graded Fayemi and Disu Aiba Efon Streets, but the issues of flooding persists in the community.

He also noted that residents of Afolabi Oyewale Street made effort to dig drainages but the effort was not enough to prevent the flood.

The Chairman of Fayemi Area Community Development Association, Chief David Yaya, explained that the community drainage was awarded to some contractors, who did shoddy job that water could not flow through the drainage.

Isolo has been pronounced the third out of eight most flooded areas in Lagos state, competing with Aboru Iyana Ipaja area, Lekki, Banana Island, Ketu, Oworonshki, Bariga and Ijora.

The residents of Peace Home Valley Estate, Oke Afa, Isolo are uneasy and scared. They are holding their breath over the destructive flood that has again started sacking them from their homes.

In the quest for relief from the disaster, the embattled community wrote several letters to the relevant authorities but all to no avail.

Some weeks ago, the Council Leader of Isolo LCDA, Hon. Remy Shittu together with other councilors visited some of the affected areas.

The councilors who were scared with the deluge at Ago Palace Community Junction, cried to the state government for help, claiming that the local government could not handle such situation.

While discussing with the residents, Shittu exclaimed: “The flood is everywhere and we are using this opportunity to appeal to the Lagos State Government to come to our rescue, this is beyond the local government.”

The community leaders also appealed to the local government to join hand with the state government to find solution to the challenge.

In Oshodi, virtually every community is affected; the flood has separated Mafoluku from Oshodi as residents of the two areas cannot cross the border. Whenever it rains, commuters would pay sum of N200 to some giant people to carry them across the flood to the other side.

It was gathered that the major cause of the flood in Oshodi and Mafoluku is the inflow of water from Oshodi-Apapa Expressway and the neighbouring communities such as Ikeja GRA.

The communities such as Old Ewu Ogunyinka, Canal boundary between Oshodi and Mafoluku that lead to Apakun bridge, Odunmbaku, the latter part of Aduke Thomas, Salami, Adeogun,  Okunade and other streets within the canal axis suffer flood outbreak caused by the inflow of the water.

It is height of flood in Ladipo area of Oshodi whenever it rains as commuters and motorists are hindered from plying the road.

Unity Crescent Ladipo Estate under Obbucra Community Development Association (CDA) has cried out for government’s interventions on good drainage system to help save the situations of flood constantly witnessed.

According to the Chairman of Nigerian Automobile Technician Association (NATA) whose workshop is in the community, Olaniyi Fashoranti, the flood is as a result of bad drainage coupled with other water forces from Air Force Base, GRA which settle in their communities.

In an attempt to address the issue, the community once made a culvert at Unity Crescent to prevent the inflow of water into the streets and also cleared up gutters to avoid water blockage.

Yet, the streets are still covered with water after heavy rainfall, making it difficult to differentiate between the road and the gutters.

Shogunle is not left out of the flood disaster as some residents have started counting their losses.

According to them, the downpour has damaged their properties as flood entered their homes and shops.

Nwazue Uzodime of 10 Fabukade Street, said a customer called him last week that his shop was flooded around 7am.

“I rushed out and all I could see was water everywhere. When I opened my shop, it was filled with water; the whole road was covered with flood which damaged the properties of the residents. The flood was heavy; it dragged a container shop used for lotto inside the canal,” he said.

Another resident, who simply introduced himself as Adex, said: “This is what we experience whenever it rains heavily. The flood dragged cars, motorcycles and tricycles into the canal.”

The community, he said, had been appealing to the Oshodi-Isolo Local Government and Lagos State government to come to their aid but to no avail.

Chidi Judge said lack of good drainage was the cause of the incessant flood.

“We have been experiencing this flood disaster for a long time. When rain falls at night, we will sleep with one eye closed and the other opened,” he said.

Reports have it that Old Ewu canal has once been evacuated with N300,000 from the community ‘s purse yet, flood persists.

The community leaders have cried out for government’s interventions to prevent buildings from collapsing, to stop the spread of diseases and floods penetrating the streets.

The Chairman, Aduke Thomas CDA, Engr. Joy Omiyale said they have written several letters to the state government but they have not yet got response from the government. He said the canal was evacuated last once during the Raji Fashola administration as the governor of Lagos state, noting that since then, nothing has been done to the canal.

He therefore appealed to the Lagos state government to be sensitive to their plight and take quick necessary action.

Meanwhile, the Chairman of Oshodi-Isolo LG, Hon. Bolaji Muse-Ariyoh has promised to continue evacuation gutters and canals to prevent the flood disasters, saying other projects such as road construction would be delayed till after the rainy season.

Speaking to our correspondent on phone, Ariyoh said: “I would not encourage anybody to embark on road construction or building of schools now because of the rain but we shall continue evacuation of canals and gutters to prevent disasters.”