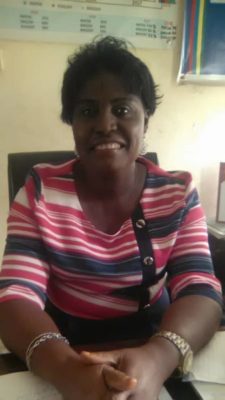 George, who resumed January 7, this year was the principal of lsolo Comprehensive Senior High School.

She also serves as the assistant secretary on the executive committee of the All Nigeria Conference of Principals of Secondary Schools (ANCOPSS).

She told Echonews that she would surpass the standards on ground by introducing new methods to ensure quality teaching and nurturing of pupils.

She swung into action on resumption day by holding meetings with the vice principals to rally support for her plan to improve the high standard of teaching and administration left by her predecessors.

In her words: “I am not going to be a sit-down principal but an up and doing principal that would be actively involved in the teaching process.”

In her Work Plans, she has introduced one-hour afternoon preparations for 2:30 to 3:30 pm every Monday, Tuesday and Thursday to increase students’ reading habits and get them ever ready for competitions.

According to her, the vice principals have been assigned to monitor the teachers, to note classes missed and make the teachers fix a makeup class(es) to cover up the lapses created.

Her plans also cut across fishing out notorious students through the help of their class teachers who are familiar with their characters, saying the idea is to help make them better persons by inviting their parents as stakeholders to join hands and correct their wrong conduct.

She however promised that her teachers would work in a relaxed atmosphere that would make them give out their best rather than working under duress as she implored them to be diligent in their primary assignment which is teaching.

She began her teaching career at the United High School, Ikorodu in 1987 and rose to the position of a principal in 2014.

Highly productive school administrator, George’s landmarks include the third position of her former school at the state-level Enoch Adeboye Mathematics Competition in 2016 and the attraction of donation of two blocks of classroom by Rotary Club to the Isolo Comprehensive Senior High School.

In recognition of her work at the Eko Boys High School, the Lagos State Government selected her for the British Council Connecting Classrooms Programme held in Maputo, Mozambique and Kent, United Kingdom from 2007 to 2008.