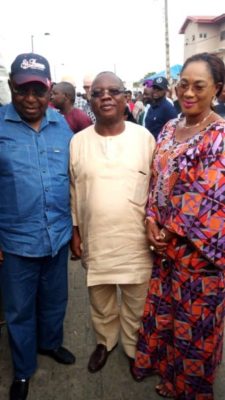 After a long period of battling with the card reader, which initially failed to read his finger print, the House of Representatives Candidate of the All Progressives Party (APC) in Oshodi-Isolo Constituency II, Engr. Ganiyu Johnson finally got accredited and cast his vote at exactly 11:00am.

Johnson, who felt distressed finding it difficult to cast his vote as the card readers initially failed to read his card on many attempts, had got to his polling unit 013, Okota around 10:09am.

after long waiting in the queue,  the candidate was allowed to vote when the card reader eventually worked out.

Asked whether he was hopeful the exercise would be concluded at the scheduled time since it started late, Johnson said he was positive that the process would gain momentum and catch up with the scheduled time.

He further expressed his assurance of winning the election with very wide margin.

He said: “I’m sure that people of Oshodi-Isolo Constituency II would vote for me and I’m going to win by the grace of God. Not only winning; I will win with a very wide margin.” 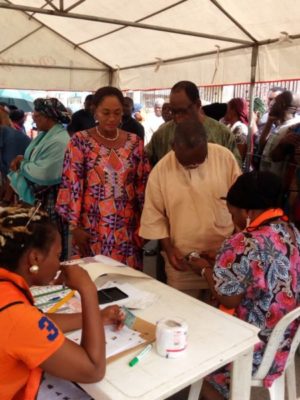 He also expressed assurance that the turnout would be encouraging despite the delay in the process and the earlier postponement of the election last week.

He however admonished the electorate to be orderly and be patient with the officials of the Independent National Electoral Commission (INEC) on duty, saying the commission has improved on its equipment and logistics. 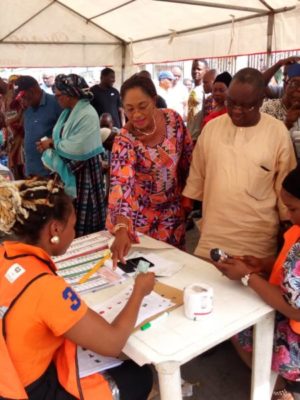 Earlier, the former Lagos State Chairman of the All Progressives Party (APC), Otunba Henry Ajomale, and the wife of Ganiyu Johnson had cast their votes without any hitch.

Responding to journalists, Ajomale said: “They started late but as you can see, it is peaceful here, everybody is queueing and exercising their fundamental Human rights. We hope it is like this throughout.  I’m going to win my polling unit because I’ve always been winning my polling unit. I’m satisfied with the performance of INEC because they’ve been doing a good job.  The voting is moving on smoothly now, as they started. It didn’t take me much time, I don’t think I spent up to five minutes.”