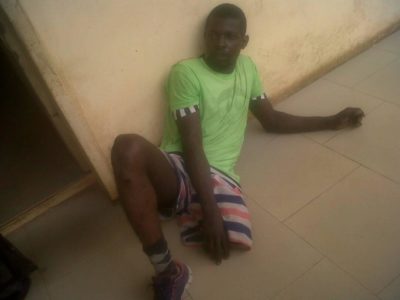 As follow up to the recent story published by Echonews about an amputee who was caught this week when he made his way into Hub Hub Plaza, Shasha Lagos with the motive of carting away with goods in one of the shops in the Plaza, the HND graduate has revealed that frustration conditioned by his physical challenge led him into robbery.

Akeem Akinola, a 34-year old graduate of Mass Communication, Moshood Abiola Polytechnic, Ogun State, stated that he operated a one man robbery and had robbed many in his state of residence, Ogun State and Lagos where he eventually met his waterloo.

The father of three narrated, “I did not set out to be a criminal but I found myself in difficult situations, got frustrated and had to fight for survival before my arrest in Shasha, he began.

“I performed well at MAPOLY where I studied Mass Communication and graduated with HND. The joy of being a graduate did not last long when I had an accident and one of my legs was amputated which changed my aspirations in life.

“I spent some time in the hospital and after the doctor discharged, life became unbearable for me and my family as all my efforts to get a job in several organizations proved abortive because of my condition.

“Before then, I was already married, had children. We all relocated to Ijebu Ode and settled there.”

He continued, “I couldn’t farm and there was no job. My family was starving and I had to tell my wife that I will move to Lagos in search of a job in order to survive.

“I moved to Lagos but to no particular place or area and was moving about begging. In the night I slept wherever I stopped, wake up in the morning and start moving around again to survive.

“I tried to solicit a job as a bus conductor. But as soon as the drivers discover my condition (one legged), they would turn down my request. One of them even tried me but he discovered that I couldn’t cope because I wasn’t able to stand and call in passengers even as I was wearing an artificial leg.”

Akinola said that the situation of things got him overwhelmed and took a new twist in his life and that marked the beginning of the end of his desire to earn money legally.

“The situation continued and I gradually started stealing and later went into breaking shops at night to steal items and resell. I once in a while do visit Abeokuta to rob but finally moved back to Lagos having been caught and attacked there for stealing and continued in Lagos.

“I do not use guns but have other small tools such as master key, pliers, and chisels, with which I used to break shops to steal items I could easily carry about. My wife and members of my family did not know I came to Lagos to rob as I usually tell them that am in Lagos to hustle and they would be surprised if they see me on radio, Newspapers and TV in this type of conditions.”

The one legged suspect said that he was unlucky when he went to Shasha area of Lagos, burgled shops at a plaza and was caught in the ceiling of the Plaza by night security guards who handed him over to the Police.

He said that if he had options, he would not be stealing because he was already educated before he had the accident.

An embattled Akinola was arrested and charged before the Magistrate court in Ejigbo and was remanded in prison custody as he was not able to meet his bail condition.