By Abolaji Adebayo and Felix Kuyinu

The former Executive Secretary of Ejigbo Local Council Development Area, Bar. Jaiye Tajudeen Alabi, has died and buried according to Islamic rite at his residence, No 8, Alhaja Iya Shina Street, Bucknor, Ejigbo Lagos, this morning, Monday the 19 the of March, 2018.

Echonews gathered that the deceased, who died at the age of 55 was not known nor diagnosed for any disease or ailment prior to his demise.

According to the family members, he took his only son to school at Mushin that morning to write his WASSCE and later called at an unnamed restaurant to eat.

It was reported that he had not finished the food when he developed a stomach ache and was rushed to hospital, where he eventually died. 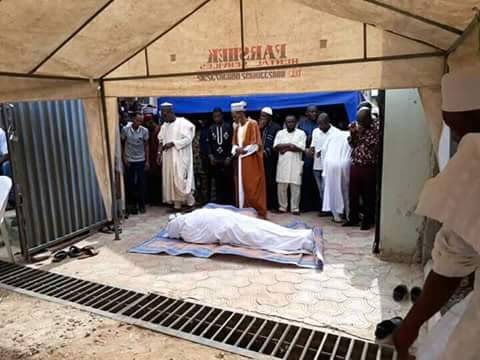 During his interment, which took place the same day, the Mudr, Mahadu Taalimul Arobiyya, Ejigbo, Alhaji Sheikh Ahmad Tijani Arikuwulo, said the death of Alabi was a great loss to the entire Muslim Human. He stated that through it has been destined that all human would die and that the deceased, being a Muslim in his lifetime, has passed the test of Almighty Allah.

He however admonished the widow to take heart and see the incident as being predestined. He asked her to be more steadfast in the religion as the only panacea to her present situation.

Meanwhile, the spiritual father sought Allah’s forgiveness for the deceased while also praying for the family he left behind.

The Lagos State Commissioner for Home Affairs, AbdulLateef AbdulHakeem, who gave sermon at the burial, challenged those who were present at the burial to perfect their behaviour to people around them, saying it would be the greatest yardstick for Allah to judge individual.

According bro him, there should be no discrimination among religions, quoting Qur’an verses to buttress his sermon on behavioural perfection. 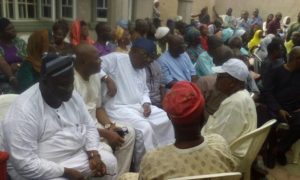 The Commissioner, who described the deceased as a man of God and man of people, said there was no doubt the he had died as a true Muslim.

In a chat with Echonews, the Executive Chairman, Ejigbo LCDA, Monsurudeen Bello, said the demise of Alabi would create a big vacuum in Ejigbo community and particularly in his family, in the local council, as well as in the APC Ejigbo branch and the whole body Lagos State.

Bello, who prayed for the deceased to meet his God well, noted that he had done greatly for the development of the local council.

He described him as a man of integrity, intelligent and hardworking when he was in the service of the local council. 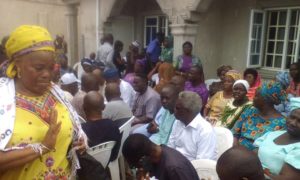 On the plan of the local council for the burial ceremony, Obe stated that the council could collaborate with the family of the deceased to give him a befitting farewell.

He said the council was waiting for the directive from the family to know how, where and when to come in.

Alabi is survived by wife, Alhaja funmilayo Alabi and a son, Ridwan Alabi.

Also present at the burial was the APC Chairman, Lagos State, Otunba Henry Ajomole and other bigwigs and members of Lagos APC.