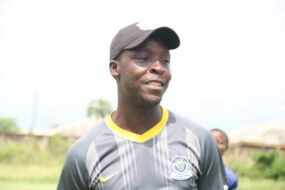 The participating teams have continued to express their experience at the just concluded 3rd edition of the Flying Officers Cup.

Speaking to ECHONEWS, the coach of Prince Kazeem Eletu Queens FC, Damilare Jaiyeola was full of praise to the organisers of the tournament and also the sponsor of the team.

Jaiyeola noted that despite crashing out of the competition at the group stage, the team was able to gain experience from the tournament, which he said will improve the players’ performance in their subsequent engagements.

“I want to appreciate our sponsor, Prince Doctor Kazeem Eletu, for giving the team the opportunity to go for the competition and also Barrister Paul Edeh for inviting our team to the tournament.

“In life, they say experience is the best teacher, we as a nationwide team meeting topflight teams in the premier league of female football is a big honor to us, and I know we were able to gather lots of experience. The ladies now know that they are yet to get to their peak as we keep developing them so that they can come top in any subsequent competition we participate.

“We are also working to register for the nationwide league and hopefully get promoted to the championship.”