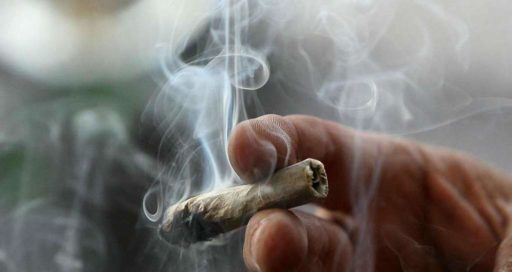 Smoking cigarette was a secret habit among youths in the past. Many would lick sweet or menthol to make sure the odour was not detected by parents.

These days, the story has gone beyond cigarettes.  More and more youths are turning to cannabis, formally known as Indian hemp. To many of them, smoking Indian hemp helps them reach the “high” and gives them the bravado to do what they would ordinarily be too shy to try.

The situation confirms a shocking report of the National Bureau of Statistics and the World Health Organisation (WHO) last year. Key findings of the report include:

“Cannabis is the most commonly used drug. An estimated 10.8 per cent per cent of the population or 10.6 million people had used cannabis in the past year. The average age of initiation of cannabis use among the general population was 19 years.

ECHONEWS investigations of the cannabis network in Oshodi, Isolo and Ejigbo communities reveal a booming trade serving hundreds of users mostly in their teens and twenties.

A visit to some places like Mafoluku, Shogunle, Ewu-Tuntun and Oshodi in Oshodi-Isolo LGA; Oboye, Agbo-ile, Lafenwa, Caroline in Ejigbo LCDA and  Ishaga, Osolo Way, Ire-Akari, Ilasa in Isolo LCDA revealed that at almost every corner and bus stop, youths gather to smoke Indian hemp with impunity.

Across the area, marijuana is traded in some open places like other products. For instance, the weed is sold at Car Wash, along Ire-Akari Street in Isolo and some other places such as Bola, Oke-Afa, Pako bus stop, Oja-Oke market in Oshodi while some people hawk the product in major motor parks.

The hawkers go about with the wraps as some of the weed hawkers even display it just as other traders exhibit their wares.

Among the areas identified as popular joints in Ejigbo are: Oboye, Agbo-ile, Lafenwa, and Caroline.

In Oshodi-Isolo LGA, some of the notorious places identified as Marijuana consumption dens for the youths in the community are Agbole at Eyinogun Street, Ogundele Airforce Base, Oja-Oke Market and Oshodi Market.

The most dreaded is the school compound as some of them were noticed to smoke in the Methodist Primary School premises (after school hours).

It was gathered that names such as ‘pot’, ‘grass’, ‘gbana’, ‘eja (fish)’, ‘weed’ and others are used to refer to marijuana by the smokers in that axis and they do take them in different forms such as smoking, inhaling, brewing as a tea or through glass pipes, etc.

Community groups are working with the police to combat the prevalence of marijuana dens. In Ejigbo, the Odua Peoples Congress co-ordinator, Mr. Gbenga Agunbiade popularly known as Soloko has busted several dens and handed the youths to the police.

Speaking about the relationship between the OPC as a security agent and the police, Soloko said they complement each other, saying whenever they (OPC) caught any of the criminals, they handed them over to the police for proper punishment under the law, noting that they could not punish such the criminals for any offence on their own, hence, the need for them to work with the police.

With the joint efforts of the police force in Oshodi and the Viglante group, it was reported that the identified places were raided but the ‘boys’ still keep increasing in number.

The Viglante commander, Kolawole Salami, stated that the three police stations in Oshodi, Makinde, Akinpelu and Shogunle have been supportive by the immediate attention given to their distress calls.

“There is constant police patrol in the areas we have located and raiding exercise has been the order of the day to have a sane community.”

He promised that the vigilante group would not relent in its effort as he wanted the police to keep up the good relationship with them so as to bring out the best in them.

A 22-year-old smoker of Indian hemp (name withheld) who claimed to get needed inspiration from smoking Indian hemp said he got into the habit through his friends.

“I started smoking through a friend. You know, most times, we follow friends around and it is what they are doing that you will also do, then, the area that I live. This is what almost everyone does. So, there is nothing else anyone can do. When you are in such a society, you would want to show yourself and behave as if you also belong. From there, I have graduated into becoming a chain smoker and now an addict. In my case, it was my friends that influenced my smoking of Indian hemp.

“I started smoking from my tender age. I used to run away from the house because at times when I had the urge to smoke, I would not be free and this usually affects me. The people around me did not like the smell and immediately they perceived the odour, they would begin to make noise and disturb me and you know, you have to avoid people’s complaints and comments and I have to live and please myself. So, because my parents and neighbours would not let me be, they don’t want to accept my choice and I don’t also like them complaining about my act all the time, I started running away from home for two or three days. Later, it increased to eight days and even one month. That way, I am able to enjoy street life. Today, I have made the street my permanent home,” he said.

A Chief Consultant Psychiatric at the Federal Neuropsychiatric Hospital, Oshodi annex, Dr. Olufunmilayo Akinola spoke on the effects of Indian hemp smoking: “When we look at the effect of the substance, we usually look at it in three different ways. We look at it from physical health of the person, psychological effect and the social, is it affecting the family life and the society.

“We know Indian hemp, if we look at it from the individual. We do know that the age with which Indian hemp smoking is started is young and at the adolescent age, they start with cigarette smoking, from where they graduate to Indian hemp.

“The principal effect of Indian hemp is the effect it has on the brain of these children. Remember they start smoking at a young age. We know there are different ways of consuming it. Sometimes, they put it in food to eat and other times they put it in tea and drink. The weed itself has almost 100 different chemicals in it. It affects the brain and their ability to think and assimilate is also affected. Sometimes from research we know that the consumption of Indian hemp can actually cause psychiatric problems and we know that one of the most significant effects it has is psychological dependence. It is what you use it for that it does for you. If they want to be bold to ‘toast’ a girl; some derive pleasant enjoyment and they started missing classes, they stop attending lectures and gradually you will see them stop functioning academically and socially.

“This drug is the gateway to other drugs, they graduate to taking heroin and cocaine, which are more dangerous and can affect various organs of the body.

“The medical advantage that has been proved to some extent is that it can be used to reduce some pains but you need to weigh the advantages over the disadvantages. The disadvantage of consuming Indian hemp is far worse than its benefit. It outweighs its advantages. Even in the developed countries, if you have to use it, it has to be for palliative measures. We should annex things that benefit us. There must be strong laws against this substance to make the youths live better and be useful to themselves and the society.”

A legal practitioner, Mr. Dare Oki said the menace will be checked if government will rise up to enforce the law forbidding smoking in public places.