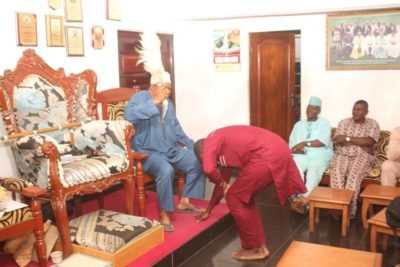 The Elewu of Ewuland, his royal highness, Oba Shakirudeen Kuti, has urge the Chairman of Oshodi-Isolo Local Government, Hon. Bolaji Muse-Ariyoh to intensify efforts on road construction as well as development of primary education just as the monarch commended the LG boss on the developmental projects his administration has been executing within the community, saying the projects were laudable.

The Royal father, who expressed his satisfaction on Ariyoh’s performance during the local council chairman’s courtesy visit to the palace, charged the LG boss not to relent on developing some key sectors especially the road network and primary education. 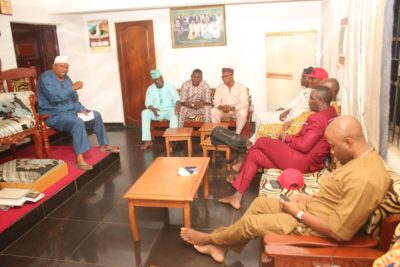 He also advised the Chairman not to fall for criticism, noting that he would be criticized always no matter how great his achievements might be.

He added that criticism should be an incentive for him to increase the level of his performance.

He commented, “The zeal at which your administration has been executing your election promises to the electorate is applauding but you need to do more and not relent on your efforts.

“You should remain focused and remember that people must criticize your achievements no matter how great they may be.”

Other issues relating to the development of the community were discussed as the royal father prayed and blessed the chairman, wishing him success in his political endeavour.

The king also used the occasion to inform and invite the chairman and his Cabinet to his coronation anniversary which coming up in May this year.

In his response, Ariyoh assured the monarch of his continuous commitment toward the development of Oshodi-Isolo community.

Ariyoh, who appreciated the Royal father for his fatherly role right from the inception of his administration, emphasized his promise not to relent in his determination to bring positive development to Oshodi-Isolo local government.

The local council boss also thanked the Lagos State Governor, Akinwunmi Ambode, for his leadership quality and support to his administration.

He noted that the developmental projects embarked upon by the governor have been turning Oshodi into a real mega city.