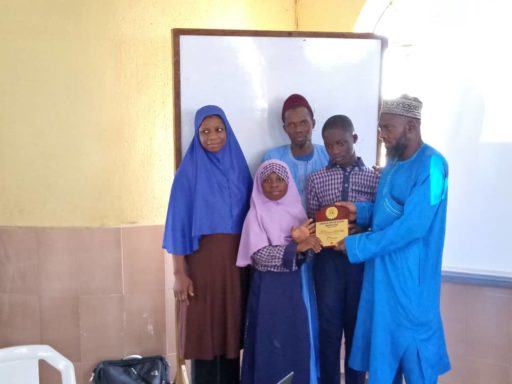 The students of Torch Bearer Muslim School, the representative of Osodi-Isolo receiving their award as the runner-up with their teachers 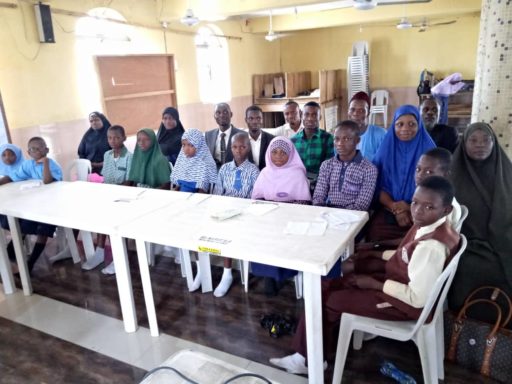 Cross section of the 1st, 2nd, 3rd, 4th and 5th winners with their teachers

At the secondary school category, the school lost the competition as it came sixth having lost some questions at the first round.

Speaking on the students’ performance, the primary school instructor, Mrs. Khadijah Osikhuemhe said the children lost at the second round due to the rule of the game which awarded them zero for picking a used question. 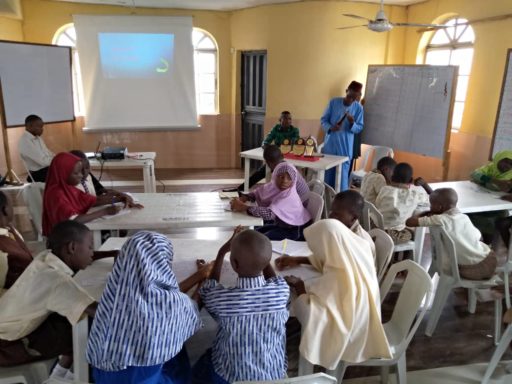 Cross section of all contestants from eleven LGAs

She said: “My students, Akinlawon Al-ameen and Ayomaya Bilqis who represented the school did very well in all the four subjects that the questions were asked which are English Language, Mathematics, Islamic Religious Studies and General Studies. They got all the questions right at the first stage of the competition. Although they later got a question wrong, they would have won the first position if not the rule of the game that awarded zero for picking an already chosen question.

Also speaking, the proprietor of the school who doubles as the LEAMSP Zonal Secretary, Mr. Semiu Adeyinka Oyebo, said the school has tried to excel, it would work harder to bring more glory to Oshodi-Isolo LGA in other competitions.

The LEAMSP Chairman, Lagos State chapter, Raimi Babatunde Faitai commended the organizing committee and the instructors of the participating schools, saying the competition is one of the ways to boost the memory of the students.

Faitai, who noted that 2019 edition was the tenth LEAMSP Lagos State Quiz competition, said the programme has helped the Muslim private schools to excel at such competitions organised by the Lagos state Government, adding that the state government has been partnering with them and giving the private schools more opportunities.

The 11 local government areas that participated in the 2019 edition which was held at Fiwakesin Central Mosque, Ikosi-Ketu were Kosofe, Mushin, Somolu, Oshodi-Isolo, Island, Badagry, Surulere, Agege, Eti-Osa and Ojo LGAs.