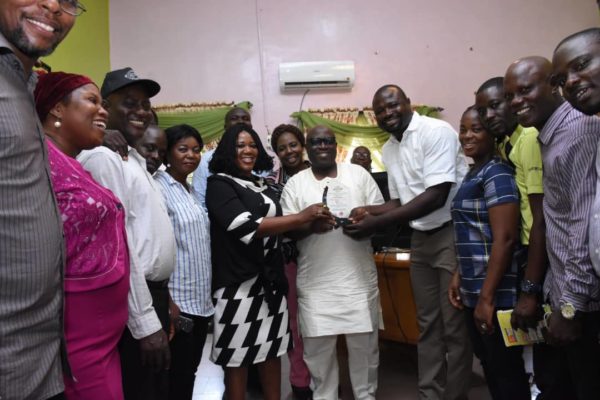 The union made the declaration as it bagged award as the 2nd Most Outstanding NULGE Branch in Lagos State.

This was contained in a statement issued by the Head of Public Affairs Unit, Kunle Oladele and made available to ECHONEWS.

In the statement, the Ejigbo NULGE Chairman, Comrade Sadiq Lawal, said the project is part of the union’s next agenda to figure out how to achieve accommodation for its members by setting up an estate.

Speaking on the award which was presented by the NULGE Lagos State Chapter during the NULGE Branch Executives Valedictory Retreat tagged “Ikorodu Oga 2019” held at Ikorodu recently, Lawal said the support of the Council Chairman, Hon. Monsuru Bello Obe has paved way the recognition and award.

He said: “We have a very good relationship with the Executive Chairman, Alh. Mosurudeen Oloyede Bello, he has done virtually 90 per cent of our demands for us. Our Head of Administration, Mrs. Iyabode Ogunyemi too has been so supportive and caring.

“The support of the Local Council Chairman and the Council Manager has paved way for Ejigbo NULGE to achieve various goals, which have earned her recognition as the 2nd Most Outstanding NULGE branch in Lagos State.

“NULGE Ejigbo branch has been up and doing as regards welfare package for the staffs. In 2014, twelve retirees were given N40,000 each. This action was well appreciated by the management hence, the management took it up afterwards. Similarly, during the 2019 Workers’ Day Celebration, ten widows from among the staff members were identified and presented with gift items.

“Every year since the beginning of this tenure, the union has continued to identify the Best Staffs in the Junior and Senior cadres. These staff members are not only identified but also awarded. The union also assists the staffs in terms of educational advancement, payment of hospital bills and training.”

It was gathered that since the beginning of the Lawal-led administration in October 2016, which would be over in October 2019, this is the first time the NULGE Ejigbo branch would be receiving this kind of award and recognition.