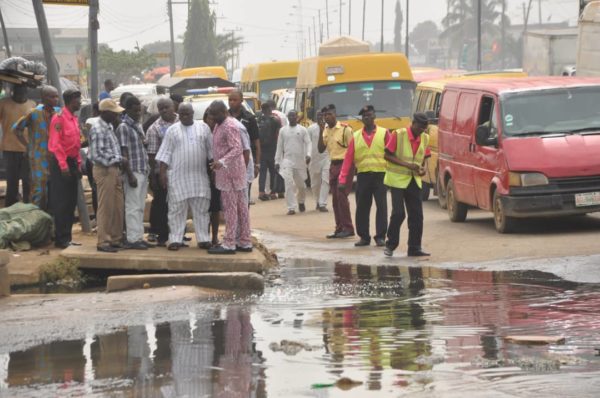 The Executive Chairman, Ejigbo LCDA, Hon. Monsuru Bello, has made an appeal to residents of Ejigbo, particularly at NNPC and Jakande Estate Junction environs to ply the roads in patience as the council is planning modification process which would make the roads more motorable for the convenience of motorists in the area.

Bello made the declaration today while examining the situation of the roads.

The Chairman noted that during rainy days, the residents in the areas which also cut across those at Egbe road complain of adverse effects in the area ranging from flooding to washing away of top soils around the roads.

He said that the underground drainages at NNPC Junction was channeled to a manhole, however, the diameter of the drain leading to adjoining manhole is bigger than the diameter of the manhole which has caused implication of little quantity of the flood pass through manhole while the rest remain stagnant on the roads causing it’s damage.

Bello, in addition, said that the council has made palliative measures around the roads ranging from spreading of boulder stones to granite alongside drilling of the blocked ring culvert to ensure free flow of flood but all attempts to curb the unwanted situation have been futile.

The Council boss also stated other factors causing a standstill of the drainages in the area also include unscrupulous act of refuse dumping and abuse of the roads by its users in the area.

The Chairman therefore appealed for more patience and understanding as the Local Council will continue to provide palliative work to ease the suffering of motorists while calling on the State Government for assistance towards ensuring a lasting solution to the deplorable state of our roads.

He appealed to all road users and residents of Ejigbo to remain calm as the challenges will soon become a thing of the past.

Bello concluded his visit to the area by swiftly instructing the works department in the council to commence palliative work on both NNPC and Jakande junctions with a promise that more inner roads will get Government attention soon.