Ejigbo LCDA cautions against flood during the raining season, evacuates drain at secretariat 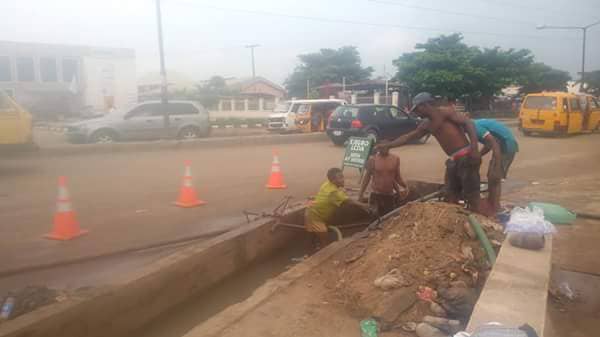 To prevent occurrence of flood at the council premises during the ongoing raining season, the Ejigbo local council authority has ordered the evacuation of the drain at the vicinity of the Local Secretariat at NNPC Ejigbo.

The exercise, which involved a number of men who were assigned to the task, was aimed at creating good drainage system at the council area as the council authority urged the residents in other ares to replicate the exercise in their various locations.

However, the Management of the council beseeched the vulcanizers around the area to desist from stocking their tyres in the drainages which has prevented free flow of water.

The council also informed the residents in the area of the need to cease from pouring dirt and garbage into the gutter, taking advantage of the rain.

In buttressing this, the council noted that necessary sanctions have been put in place against anyone caught in the act around the area and other parts of the community.

Furthermore, the residents of Ejigbo were implored to make sure they keep their surroundings clean to prevent the community from being flooded during the raining season.