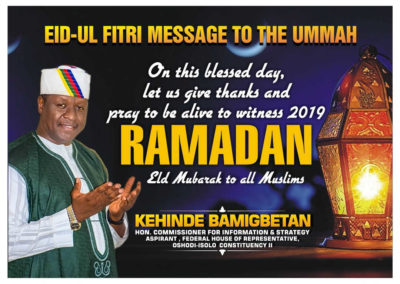 As Muslims world over celebrate the end of 2018 Ramadan, the Lagos State Commissioner for Information and Strategy, Hon. Kehinde Bamigbetan, has sent congratulatory message to the Muslims in Nigeria, rejoicing with them on the Salah day.

Bamigbetan however, charged them to imbibe the teachings of the Ramadan, asking them to be of good behavior as the true follower of the exhorted Prophet Muhammad, whose character has been described as best of the mankind.

In his message, the commissioner beseeched the Muslim brothers and sisters not to be involved in any act that can breach the peace of the country. 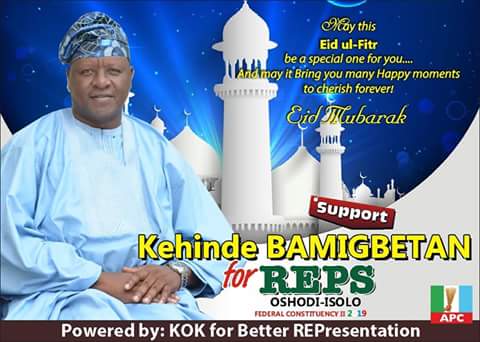 Speaking particularly about the 2019 general elections, Bamigbetan, who is also competing for a set in the Federal House of Assembly under Oshodi-Isolo constituency II, said that the Muslims, as much as they are expected to take part in politics, must jettison do or die affairs and ensure the elections are conducted in peace.

While admonishing them to continue the good deeds they have exhibited during the last one month, the commissioner prayed for the acceptance of all their prayers by the Almighty Allah.

He said, “Eid – Mubarak to our Muslim brothers and sisters on the completion of the Ramadan. May Allah accept our prayers.”