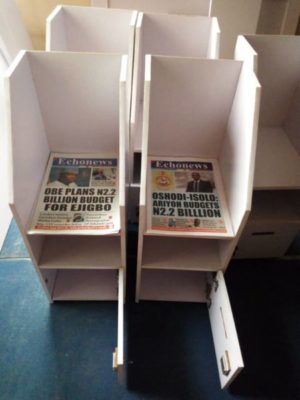 In response to the popular demand of ECHONEWS esteemed readers, the newspaper organization has launched the first set of the free newspaper stands in strategic locations across Oshodi-Isolo-Ejigbo.

Announcing the installation of the stands, the Managing Editor, Mr. Rasheed Obe said it became necessary to introduce the stands because the current circulation figure of 5,000 is not enough to meet the yearnings of many readers who are in love with the free newspaper.

He explained that currently, ECHONEWS employs a team of distributors to circulate the paper to different parts of Oshodi, Isolo and Ejigbo.

However, with the imminent plan to increase the production figure from 5,000 to 10,000 copies, a more automatic and audience friendly option is being provided so that readers can pick from various strategic stands on weekly basis.

He further said that by 10am on Mondays, all the stands at strategic locations would have been provided with 100 copies for the reading pleasure of the readers as well as for them to get firsthand information of the happenings in their communities.

He said the objective of the paper is to be the best circulating newspaper across the country and hopes to hit the target of 30,000 copies per week in the nearest future.

He revealed that this will give the advertisers more confidence to use ECHONEWS as the most valuable platform to penetrate the highly competitive market and reach their widely dispersed consumers In Oshodi, Isolo and Ejigbo.

He, however, thanked various advertisers for patronising the newspaper and helping to demonstrate that community newspaper is the closest to the people which provides information and intelligence that many residents require to perform their civic and commercial activities.