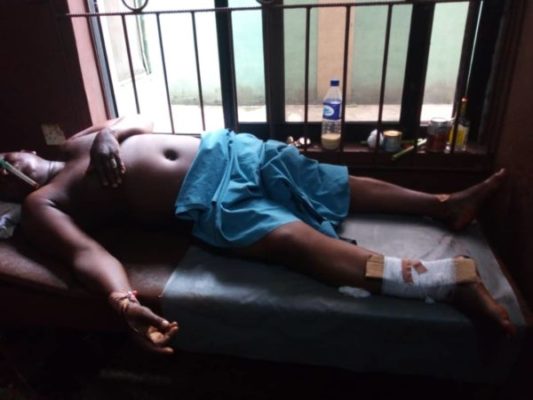 In the early hours of Tuesday, four armed robbers were reported to have accosted Mr. Adebayo Isaiah Osho, popularly known as “Apostle Of God” who owns and resides on Adebayo Osho Street, Ori-Oke,  Ejigbo, escaping with N350,000.

The incident happened in Ona-Iwa Mimo Street on the victim’s way from Ecobank, Ile-Epo branch, where he had gone to withdraw the said amount of the money.

An eye witness, who pleaded anonymity, said the robbers were four in numbers, each with a gun, approached the victim who had briefly stopped his Pajero Jeep with registration number FST96DL to talk to someone on the street, aggressively asking him to surrender all the money he had on him or risk his life.

He said despite giving them the money, the robbers still shot him on his legs, leaving him helpless in the pool of blood.

When visited at Living Spring Hospital, Ejigbo, where he was being given intensive health care, the victim told Echonews that the robbers met him at Ona-Iwa Mimo Street while he was having a short conversation with someone.

“They were four in number and they asked for the exact amount I withdrew. They requested for the whole N350,000, boasting that someone had informed them at the bank that I collected such amount and that  it was inside my pocket.

“I didn’t argue I gave it to them. Though, they asked further if I still have money in my car and I told them to check my car for confirmation. They did and found a bag in which I kept my files and personal documents. They went away with it,” he narrated.

He further said: “Having surrendered everything to them, one of them said he didn’t trust me that I might trail their steps with my car so, he aimed his gun at my legs and shot my right leg thrice and left leg twice. I was lucky to have fallen down before he pulled the diary trigger, it would have hit my chest.”

Meanwhile, Osho said he could not suspect anyone as the bank was too crowded, saying “Aside from the two female cashiers that attended to me on the counter, I’m suspecting a woman who tried hard to familiarize with me while in the bank. I’ll be done if she could be identified and questioned.”

The doctor-on-duty, Ekanem Idong said the 67 years old man was fast responding to treatment and that the bullet would soon be removed.

However, efforts to get across to the Police Division who visited the scene for information and development from their side on possible arrest of the armed robbers had, so far, proved abortive.