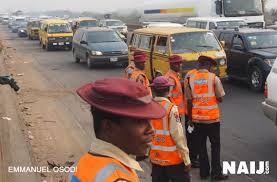 The Lagos State Sector Command of the Federal Road Safety Corps (FRSC) has issued a warning to commuters to desist from throwing wastes out of moving vehicles, saying defaulters may be sanctioned with N5,000 fine.
The statement was issued by SP Adedotun Abayomi, an officer of the Command in an interview with newsmen recently.

Abayomi stated that the command would intensify its efforts in curbing the unwanted situation, stating that there was an initial sanction and fine on anyone caught in the act, which could cause accidents on the roads.
“Dropping off things from a moving vehicle is totally wrong and it is an offence known as ‘failure to cover unstable materials’, and it comes with N5,000 fine.

“People need to stop throwing things off moving vehicles, drivers should encourage their passengers to use the dustbin in the vehicle instead of throwing them out,’’ he said.

Abayomi stated that the Command has received lots of complaints from the street sweepers in the state expressing their dissatisfaction on account of such act which according to them could lead to fatalities.

The FRSC officer, an Assistant Patrol Commander, disclosed that there was a serious quarrel between a commercial bus driver and a private car owner today at Ago Palace, Isolo on account of a waste bag thrown from a commercial bus, which almost caused accident on the way.

The car owner, one Chinedu Okafor said that he was on the verge of hitting another car along the way as he struggled to control the situation immediately the bag was thrown at his windscreen, disclosing that the act should be prohibited with necessary sanctions awaiting offenders.

He stated: “It is becoming a norm for people to drop things off while in a moving vehicle. It almost caused an accident for me today.

“These days you see people throwing what they have eaten off their vehicles, sometimes it is sachet of water, gala nylon, or even empty water bottle and so on. Everyone should cultivate the habit of putting dirt in the dustbin of the vehicle to avoid dropping them off which may cause accident and litter the environment.

“The government needs to put precautionary measures alongside sensitization on the need to stop such acts.
“It’s expected that it won’t be easy to stop people from doing that so the government should impose sanctions on offenders.