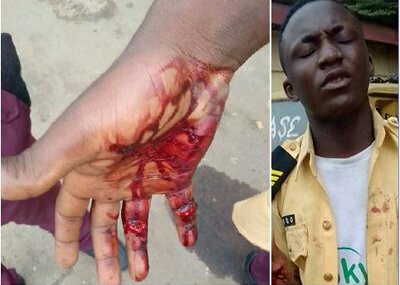 A staff of the Lagos State Traffic Management Authority (LASTMA), Olanrewaju Yusuf, has revealed how he was stabbed in the hand by a commercial bus driver on Wednesday evening at Palmgroove bus stop.

Reports have it that the driver of the yellow and black striped bus with registration number EPE714XP, was seen by LASTMA officials in their patrol van, picking passengers from undesignated stops between Obanikoro and Palm Grove which was noted by the traffic officials to have contravened traffic laws in the state and when the officials cornered the vehicle and attempted to arrest the driver, he stabbed Yusuf with a broken bottle and fled.

The commercial bus left by the driver after fleeing was taken to the LASTMA office at Oshodi, while Yusuf who was taken to the Lagos State Accident and Emergency Centre at Toll Gate, along the Lagos-Ibadan Expressway narrated his ordeal prior to the incident.

He said, “Around Palm Grove Bus Stop, we blocked him with our patrol van where he stopped to pick passengers. I entered the passenger’s seat; the driver held an empty alcohol bottle, broke it on the steering wheel and pointed it at my neck. I did not know what came over me; I tried to use my hand to block my neck area, but he stabbed me on my right hand. I was shouting help; the pain was much and I lost much blood. My commander came to my rescue and I was taken to the hospital.

“The hand is still paining me, though I am getting better. My hand was stitched in about three places.

“I don’t know where the bus was coming from or going to, but I noticed that the route I saw written on the bus was Oshodi to CMS.”

The official in charge of the Bus Rapid Transit (BRT) enforcement unit of LASTMA, Odunuga Kayode, said that he received a distress call around 6:45pm from one of their patrol teams around Palm Grove inward Onipanu that a commercial vehicle was apprehended for picking passengers at unauthorized stops on the highway.

“I was told that in an attempt to arrest the vehicle, the driver parked the vehicle and stabbed one of our men,” Kayode started.

“While our men were trying to rescue the injured official, the driver and conductor took to their heels and all passengers went in different directions. The vehicle was arrested and is in our office at Oshodi. The matter was reported at the Ilupeju Police Station for further investigation. The number of the vehicle has also been sent to the Motor Vehicle Administration Agency in order to get necessary details of the vehicle owners to assist in the investigations and bring the driver and conductor to justice for their crime.”

Kayode who discussed the relationship between LASTMA and road users appealed to members of the public to cooperate with the agency, noting that it was created with the motive of ensuring there is free flow of traffic in the state, which would reduce Lagosians’ travel time, which would in turn save their businesses and increase economic growth.