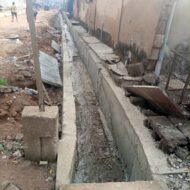 The councillors representing Ifoshi and Fadu Wards in Ejigbo Local Council Development Area (LCDA), Hon. Grace Okere and Hon. Shonde Tajudeen, have appealed to the residents to utilise and maintain the Governor Babjide Sanwo-Olu sponsored projects in each ward after completion.

They made the appeal while supervising the ongoing David Ogunti road construction in Ifoshi ward and a public library being constructed in Ejigbo Primary School compound in Fadu ward.

Okere noted that the ongoing road construction was a collective agreement of the principal officers of each Community Development Association (CDA) in the ward.

“We had a community meeting where all important necessities for the community were tabled and we selected in order of importance to the community. The project was approved not only for us to have a remarkable project done during our tenure but to also relieve our community of their needs.”

On his part, Hon. Shonde revealed that the public library project which is  60 percent completed was selected among others as the first phase of the N25 million project by Governor Babajide Sanwo-Olu to encourage excellent learning in Fadu ward.

He, therefore, called on students and other prospective users of the project to maintain order while making use of the library after completion.

He also charged the residents to take ownership of the project.

“Principal officers in the community and I chose the project to assist youths in our ward and Ejigbo at large, to create a conducive reading centre for the youths preparing for both external and internal examinations.

“I hope that the seven CDA chairmen of Fadu ward would effectively take charge in monitoring readers after completion so that it would be beneficial to generations to come.”

The councillors, therefore, appreciated Governor Sanwo-Olu for reaching out to help the community through the councillors across Lagos State while encouraging residents to sustain the projects and avoid disposing refuse in the drains to avoid flood.

Booksellers in Ejigbo have continued to lament  low sales, claiming that private schools are causing their predicament.

According to them, the habitual sale of customized books and stationeries to students by private schools is the major factor contributing to their low sales.

In separate interviews with ECHONEWS, booksellers in Ejigbo complained that they have not made good sales seven weeks after schools resumed..

Owner of Needs Bookshop, Mr. Obidike Chukwudi, disclosed that private school owners prefer patronising authors who do not distribute their publications for sale in bookshops for fear of piracy.

He also noted that private schools have cultivated the habit of using customised exercise books rather than allowing their students to buy from bookshops.

He stated: “The state government usually purchases books directly from authors who, for fear of market competition and piracy, restrict the circulation of their publications while private school owners get theirs from available open market. This has been a setback for us over the years.

“Presently, the costs of books we have now are higher due to the hike in the cost of purchasing them because bookshop business is capital intensive but it is a setback for us because few customers that patronize us are already complaining of the high price of our books.

“Most of the books you see on our shelves are not produced in Nigeria because of the capital required for production. Many authors prefer producing their books outside Nigeria to save cost for the amount spent on electricity, papers, ink and others is higher here in Nigeria. We believe that the government can help to reduce the cost of production.”

Also speaking, the owner of Cosmos and Co. Bookshop explained that bookshop owners in Ejigbo do not have an organised body to oversee their affairs in a coordinated manner.

“I believe that if we have a registered body, something like Booksellers Association of Nigeria (BAN), Ejigbo branch that would cooperatively relate with Lagos State Association of Bookshops and Stationers in Nigeria (LASBAN), we would have long reached out to people higher than us that would help regulate our business.”

He condemned the private schools for not patronising bookshops, appealing to them not to restrict students from buying books and stationeries outside school.