Competition is not our challenge – Taiwo Supermarket 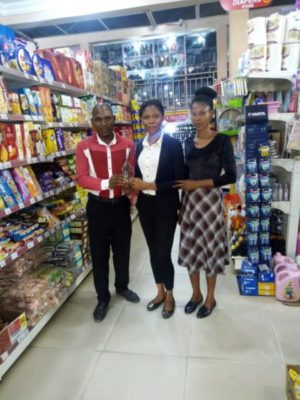 The management of a supermarket located at Isolo area of Lagos State has said that despite competition, they have not lost their sale level, saying the market has been favourable to them since the inception of their business activity in Oshodi-Isolo LGA.

The 2018 Echonews Community Award winner maintained that its ability to play the game has stood it high among all other competitors within the community.

Speaking with Echonews Editor, the Supermarket Supervisor, Jane Kenneth, said despite the economic hardship, customers still patronize the supermarket for their daily needs.

She said although the economic situation has had its effect on the business generally, the supermarket has not been much affected as people could not do without consumable goods for their livings.

“though there are many competitors around this area, competition has not had significant negative impact on us due to our ability to play the game. If you are good at what you are doing, you will always excel.

“Marketing has strategies and we have deployed the most viable strategies and that is why we are higher in sales. Although I cannot say we have all the customers, I can tell you that since we started our business here in Isolo, there has no been doll moment. As you can see, customers troop in and at least a customer would pick one item.”

Speaking on the Award, the market supervisor said it was a privilege for the supermarket to have been singled out of others as the Best Supermarket, adding that it was recognition of their relevance and contribution to the economy of the community.

She said the store has been committed to customers satisfaction by making sure they get what they want at any point in time.

Kenneth, who noted that investment in supermarket is huge, said she could not categorically disclose the investment worth of the supermarket, saying it runs several millions of naira.

However, Kenneth identified controlling of customers as one of the big challenges faced by the supermarket as it is hard to get every customer satisfied.

According to her, due to the human nature, some customers refuse to be guided thinking they have liberty to do as they want to satisfy themselves.

She added that some other customers would come to the store to steal which has also posed as a challenge but with the aid of CCTV, they are being caught.