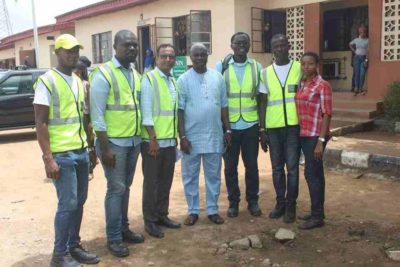 As part of effort to make the Cleaner Lagos Initiative (CLI) a great success, the promoter of the Initiative, Visionscape, has sought the support of government of Isolo Local Council development Area, while sensitizing the residents on how to key into the scheme as it embarked on awareness creation about the activities of the new waste management regime introduced by the state government.

During its visit to the secretariat recently, the company’s delegation, led by its Operations Manager – Lagos West, Aravindu Valmeekam met with the Executive Chairman, Hon. Shamsudeen Abiodun Olaleye and members of Community Development Committee (CDC) Isolo LCDA seeking their support on the exercise.

According to Valmeekam, the purpose of the visit was to sensitize members of the CDC and create awareness about the activities of the company in the management of waste across the state.

Valmeekam admonished the residents to be disciplined by placing their refuses in the designated places for the operators to be able to pack them as and when due. He said that the exercise needed the support of the people, stressing that government alone could not do it and achieve reasonable result.

He disclosed that Lagos state generates more than 10000 tons of waste per day. He said the government has already provided two dump sites situated in Epe and Badagry.

He asked people to be tolerant and exercise patient over the inability of the company to penetrate into all streets of Lagos yet, saying this was due to insufficient equipment especially waste bin, which were still been expected from foreign countries.

Meanwhile, the Chairman, Community Development Committee, Alhaji Fatai Abisiga, urged the community to support the initiative by complying by the rules and regulation, saying working with the operatives would also help the residents.

The company also sensitized community leaders on how the new waste management initiative would be driven while analyzing the current challenges hindering the initiative from getting to the grassroots.
The delegation which also included the Area Manager, Isolo LCDA also educated the residents on the best way to preserve waste bins before being evacuated by CLI operatives.

The Visionscape team however sought the cooperation and support of the council and the various communities in Isolo LCDA in its task of bringing a new culture in waste management in the state.

On this note, the team enjoined community leaders to be vigilant to ensure that people don’t discharge refuse on the road, and drainage as well as other unauthorized places.