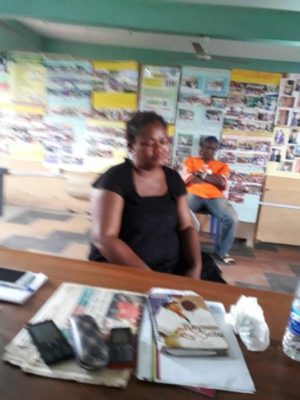 The accused killer
The Police are on the trail of one Mrs. Ada Samuel who physically abused, killed and buried a 12-year old maid.
The primary four pupil of Kusoru Primary School Ilasamaja under Oshodi State Universal Basic  Education Board (SUBEB) was reported killed and buried by her guardian, Mrs.  Ada Samuel.
According to the reports, the deceased maid, Ugunali Ifunaya, had earlier reported at the Oshodi SUBEB that N200 given to her was missing at home and she inquired from her guardian’s husband, Mr. Samuel who shouted her and told his wife that the deceased accused him of taking the money she kept. 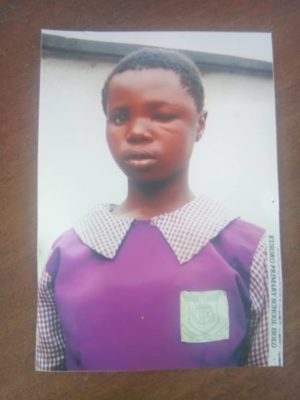 The Late Ifunaya
Upon hearing this, Mrs. Samuel beat Ifunaya with cane, steering stick known as (turning garri stick), knife  and pot cover and finally poured Cameron  pepper into her left eye leaving her with a swollen eye.
SUBEB instructed Mrs. Samuel to ensure that the pupil received good medical attention by a qualified optician in General Hospital.
Afterwards, the victim complained  of severe headache due to poor treatment given to her with drugs bought from chemist according to the victim’s  report.
However, Samuel stated that she earlier took the deceased to a private clinic and that the test carried out indicated that she had malaria and typhoid.
Few weeks later, the accused killer called SUBEB that the girl had died and had been buried in her home town.
Meanwhile, the Child Protection Network (CPN) Oshodi chapter got involved in the case and sought the permission of the Lagos State Commissioner of Police, Edgal imohimi, to get Ago DPO, CSP Oyin Francess Adamu, to lead the squad to No, 107 Femi Killa Ago Palace Way, to arrest Mrs. Samuel for interrogation.
Echonews correspondence, who accompanied the squad to the residence of the accused killer, reported that the accused and her husband had left home since two weeks ago.
However, the Police assured that the accused would be napped as search continued.