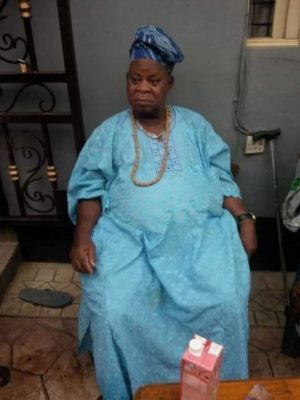 A frontline leader of Police Community Relations Committee (PCRC), Chief Rasaq Agbede has died at the age of 86 after some years of meritorious service to the community.

In his tribute, the PCRC Chairman, Amos Johnson, described Chief Agbede as a committed elder and leader who never failed to fulfill his promises.

According to him, despite his old age before his death, Chief Agbede would not desist from contributing to the meeting and the community to the best of his capacity.

Johnson wrote: “Baba, Chief Rasaq Agbede as I remembered him:

“First and foremost was his usual polite manner in reminding us that we did not conduct the meetings in vernacular, but only in English and that’s why he did not like to contribute every time, but he enjoyed coming to the meetings.

“Secondly, after his 83rd birthday, he confided in me that he wouldn’t be able to attend meetings regularly on account of age related functions of the body, but would be sending his dues to the meeting.

“I testify that Baba kept religiously to that promise. Every meeting day, a young man would bring his dues and that of Chief Ifagbamila to the meeting.

“When he was at the meeting and pledges or donations were triggered, Baba would pay whatever he could afford on the spot or pledge and redeem it later.

“He is not in the habit of owing. He paid for his ID card, but was unable to collect it.

“Such is the way to know people who are responsible and committed. Baba is one of such.