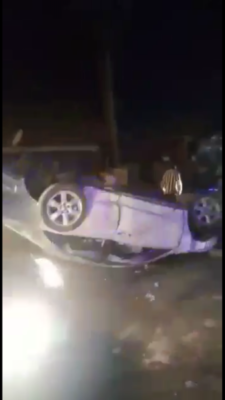 Plans of the police to prosecute Nwokedi Obinna, the driver of the Toyota Camry with registration number LSD 619 FJ that summersaulted and killed Obuasi Simeon, a 27-year-old jobseeker from Anambra on Sunday December 17 on Kudirat Adenekan road may have been aborted following the request of the victim’s family not to pursue the case further.

Echonews learnt that a letter of undertaking backed by an affidavit to that effect stated that the victim had come from Anambra to Lagos to look for job, adding that members of the family in the state lacked the resources to be travelling to Lagos to appear as witnesses if the case went to court.

But Echonews gathered that the family of the driver, who is considered a suspect until proven guilty by the court, had reached out to the victim’s family promising to pay a handsome amount to take care of the burial expenses and provide for the welfare of his dependants.

It was learnt that the suspect’s family made the offer after a meeting of both families with the Divisional Police Officer, CSP Olabisi Okuwobi, at the divisional police station, Ejigbo.

The Lagos State Police Public Relations Officer, Chike Oti, had earlier said that the suspect would be arraigned as soon as the family of the deceased identified him.

The Ejigbo DPO, who confirmed the incident to Daily Post, also said that the driver and the car were still in her custody.

However, the suspect’s family later made way to Ejigbo Police Division, where the matter was reported, stating their interest in liaising with the victim’s family to reach compromise with compensation.

Nevertheless, the PPRO told Echonews that the police were still putting up investigations on the case.

He said that the remains of the deceased had been deposited at the Isolo General Hospital as investigation continued.

It was gathered that the accident was caused due to disregards for traffic laws by the road users.

According to an eye witness who spoke to our correspondent under anonymity, the accident was caused by a commercial motorcyclist who took one way to face the unsuspecting driver.

He explained further that the driver, suspected to be intoxicated with alcohol, was driving at high speed while blasting music at higher volume and lost control when he saw the reckless bike driver.

His words: “I was coming inward Ejigbo by Canoe and I met the accident. It was noticed that a bike man popularly called okada who took one way facing the Toyota vehicle who was going outward Ejigbo on high speed blasting music lost control. He swerved off the road. The car ran on the walkway and hit a pedestrian who was walking on the walkway. It hit and smashed the passer by to the nearby shop, killed him while the car summersaulted.

“The three passengers in the car who were injured were helped out. They later sneaked off the venue. It was the DPO of Ejigbo Police station who organized the removal of the car and the deposit of the corpse at the mortuary.”

However, Echoenews gathered that the motorcyclist who caused the accident by taking one way was yet to be apprehended as at the time of filing this report.