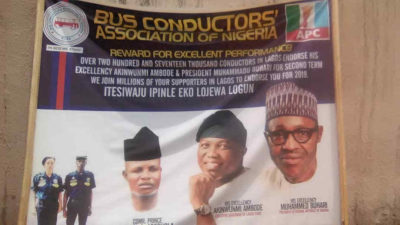 The bus conductors under the umbrella of Bus Conductors Association of Nigeria (BCAN) have embarked on reform before the commencement of Electronic Transport System in Oshodi in conformity with standard practice as measures have been put in place to sanitize conductors to conform to rules regulating the sector.

To assure the safety of passengers, the association unveiled new innovation that would cover good identification of conductors in a training exercise that would address their prone lapses.

Speaking with Echonews, the General Secretary of the association, Comrade Francis Odinukaeze, said the innovation was initiated by the association President, Prince Israel Adeshola, who deemed it fit to make the system reputable.

Odinukaeze disclosed that the objective of the association is to have decent conductors in collaboration with Lagos state driving institute to curb eventualities of ‘one chance’ and others vices perpetrated by unidentified drivers and conductors.

“The use of minors as conductor is against the association’s ethics and would be addressed in the training alongside driving without conductor which leaves the driver to play dual role of driver/conductor at the same time, endangering passengers lives.

“Discipline must always be instilled in the business to make it organized and also creating good relationship with passengers which will boost the image of the association.”

He emphasized that safety of the passengers and general public should be the major concern more than focusing on monetary aspect.

In addition, the Organizing Secretary, Tunde Adeoye caped it up by saying that the right mechanism to checkmate the activities of commercial vehicles would be entrenched in the training exercises that would help their daily routine.