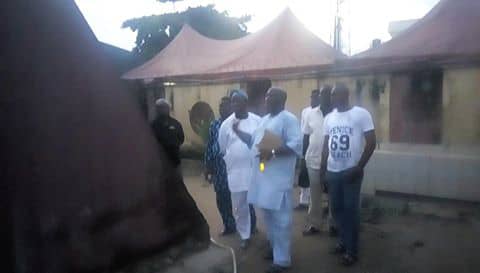 The Lagos State Commissioner for Information and Strategy, Hon. Kehinde Bamigbetan, has lauded the Chairman, Ejigbo Local Council Development Area, Hon. Monsurudeen Bello, on the ongoing construction of the Legislative Building in the Council Secretariat, disclosing that he was impressed with the quality of the works being done within a very little time.

Bamigbetan, during his visit to the Secretariat during the weekend, stated that the building, the first of its kind in Ejigbo LCDA, is a joy to see as the facilities in it are suitable for the demands of such construction work.

Part of the facilities include the Chamber of Councilors through screeding and POP designs around the building which the Commissioner described as “latest in town”.

He commended the vast changes made with regards to the face-lift activities at the Secretariat by the Bello led administration, stating that such feat would boost the community positively in reaching out to the demands of the residents in the area.

He however urged the council boss to do more.

Bello, who ushered the Commissioner into the building, stated that the council would not rest on its oars as the target of his administration is a continuous positive exercise rendered to the community.