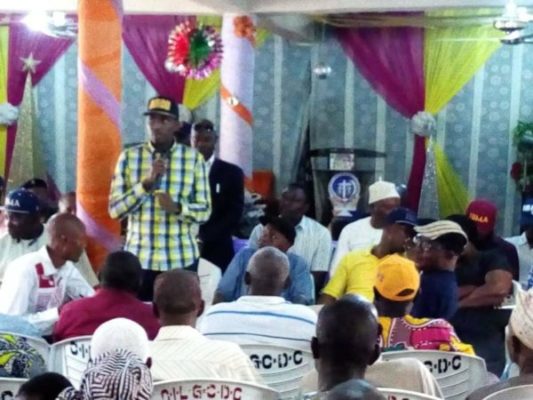 The Oshodi-Isolo Local Government Chairman, Hon. Idris Bolaji Muse-Ariyoh, in what seems to be a family meeting, recently engaged the community leaders under the auspices of Community Development Committee (CDC) to deepen inclusive participation and involvement in governance at the grassroots.

The meeting was a robust interaction between the government at the grassroots and the community leaders as issues affecting the progress of the community were deliberated on with measures on how to secure the community from environmental hazard and effective community policing coupled with radical measures on rescuing the state of infrastructure within the local government.

The council Boss, who frowned at the way the community was becoming dirty, told the community leaders to be more proactive and encourage their people to manage their waste in a proper way that wouldn’t cause flood, erosion and other environmental hazards to the community.

Issues affecting waste collection were also discussed as the Managing Director of Excellence and TUNAP Company that operates as private refuse operators (PSP) within the local government explained some of the challenges facing their operations which seemed to be hindering their effectiveness in the area of rapid response to collection of waste.

The Managing Director of Excellency Link Refuse Services, Mr. Oriyomi David, explained further that most houses owed huge sum of money which was affecting their efficiency.

Ariyoh charged the community leaders to encourage the waste collectors by paying their dues at the right time to prevent dirty environment.

The council boss also told the participants that the local government, through the environmental department would go tough to ensure that every house adhere strictly to the sanitation laws which would guarantee healthy living.

“There is no means to healthy living than ensuring that the environments are clean which would prevent outbreak epidemic.

Health is wealthy they say. How do we live healthy if we don’t give utmost attention to our environment?” the Chairman asked rhetorically.

Security of lives and properties is the primary responsibility of the government.

The Chairman, during the mini town hall meeting which also had in attendance the representatives of the Divisional Police Officers (DPOs) of all the police stations within Oshodi, registered his displeasure to some of the security challenges and threat the community has been experiencing recently.

He used the medium to charge the DPOs and the men of the police force to be more proactive in the way they handled the security issues as the security report at his disposal were not encouraging.

The police responded through the DPO of Akinpelu police station representative that they were doing all within their capacity to ensure that there was no breakdown of law and order in Oshodi, promising that the police force would step up their efforts and warned the community leaders and politicians to henceforth not interfere in their operations, especially in the area of arrest of suspects.

The Chairman of Lagos State Taskforce, CSP Saheed  Egbeyemi, who was also in attendance at the meeting charged the people on effective community policing.

He hinted that ensuring adequate security begins with an individual, saying “there is no effective policing than community policing which begin with you and me.”

He implored the community leaders to build harmonious relationship with the DPOs and see how they could partner to guarantee adequate security of lives and properties of their community.

“Effective community policing is a collective responsibility which is aided through supplying of adequate information to the police officer.

“Police work with information, learn how to provide them genuine information of what you see as threat or danger to law and order,” Egbeyemi submitted.

Discussion was also held on the state of roads in Oshodi and how to ensure they are in a good state.

The council chairman explained that since the inception of his administration, he has intensified efforts to put many of the roads within Oshodi community in a good and motorable condition as his administration has constructed new roads, informing that resurfacing and grading have also been carried on many roads.

Their core duty was to ensure that community roads are manage independently by the committee which would be funded by the local government to manage all the roads in the community on a palliative measures.

The Chairman assured the people of his determination to put many roads in Oshodi in a good state than what is currently experience.

GCE Forms were also given to the CDC to give to students within their community.