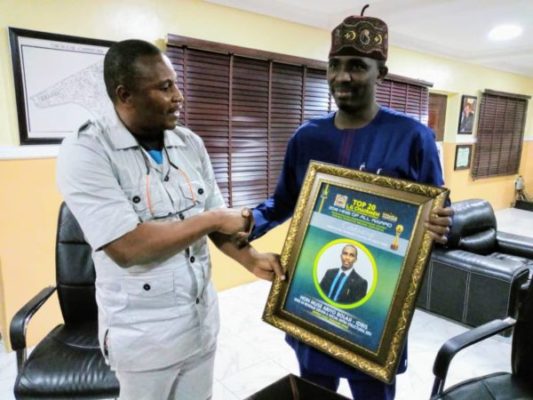 While presenting the award to the Chairman in his office, the publisher of the Magazine, Oyelami Olarenwaju, said that the organization examined the activities of political actors before coming up with the award.

He said, “In this regard, our search beam focused on your selfless leadership spirit and outstanding remark in the historical annals of Lagos state local government administration which your commitment to revenue driving and social infrastructural development has proved in bringing solace and good governance to your community.”

Responding, Ariyoh said he felt honoured to be appreciated and also saw the gesture as an avenue to do more, saying that his passion, willingness and efforts have been noticed by those who appreciate growth and development.

He stated that despite the enormous challenges that seemed insurmountable at inception, his resolution and determination of making Oshodi work for all has been impetus to turning impossibility to possibility.

He added that he desires to serve Oshodi people better than ever in whatever capacity he is privileged to do now and in the nearest future.

The Assistant Managing Editor of the magazine, Mrs. Sarah Shofowora revealed that the award ceremony was held on the 28th of June 2018 at Ostral Hall and Hotel, Alausa Ikeja but the Chairman could not attend due to his tight schedule, which necessitated the presentation of his own award on 14th of August, 2018 in his office.