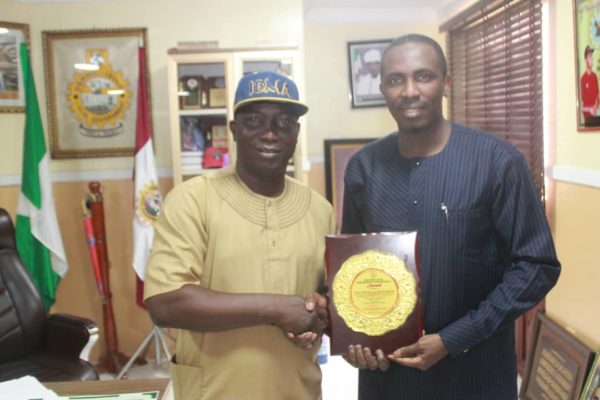 Ariyoh, receiving his award from the council leader, Obasa

In recognition of purposeful leadership, human oriented and giant stride in bringing good governance to the grassroots, the Chairman of Oshodi-Isolo Local Government, Hon. Idris Bolaji Muse Ariyoh was honoured with a meritorious award as one of the Best performing local government chairman by the office of the Secretary to the Federal Government.

The award came after critical inspection and evaluation by the delegates of the federal government based on the level of growth and development achieved by the 774 local governments.

Oshodi-Isolo local government was ranked one of the best in terms of good governance delivery across all sectors of governance at the grassroots level.

The award was received on his behalf by the leader of the counselors, Hon. Rasheed Obasa, at the Nigerian Local Government Summit held at M&M event centre, Abuja.

While receiving the award in his office from the council leader, Ariyoh promised to keep the flag flying high by maintaining the standard and even do more to cover more grounds.