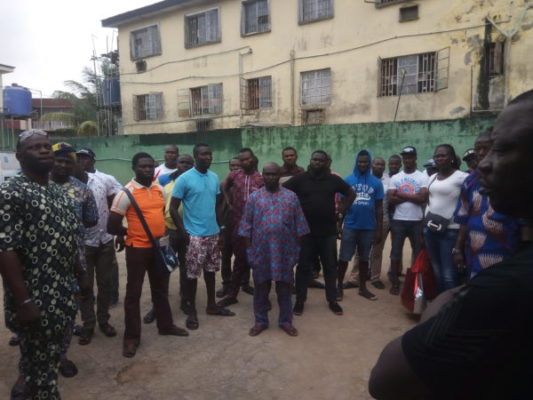 As the All Progressive Congress (APC) goes to poll to elect the party’s flag bearers for 2019 gubernatorial elections in Lagos and some other states of the federation tomorrow Monday the 1st of October, 2018, the executive members of the party and the Chairman of Isolo Local Council Development Area, Hon. Shamsudeen Olaleye, have said that Isolo LCDA has perfected plans and preparation to hold a violence-free Primary.

This was made known as the party distributed membership cards to its members in order to afford them the opportunity to vote for their favourite candidate during the direct primary.

He asked them to go to their various wards that the cards would be brought to them there.

Echonews learnt that the cards available for distribution were for those who had registered since 2014, and that any member who registered lately might not be able to participate in the voting exercise.

Meanwhile, the LCDA Chairman, as the chief host, said he has collaborated with the security agents to forestall peace during the election across the LCDA.

Olaleye, who noted that the Primaries have started with the Presidential Primary across the country, reiterated his commitment to peaceful free and fair Primaries in his domain.

He noted that since it is direct primary, every eligible voter would be allowed to exercise their right.

Commenting on the issue of those who were afraid that their cards might be missing, Olaleye said that directives would come from the State level and would be disseminated to every member.

“It is normal for people to agitate as nobody wants to be disenfranchised especially when some people felt that they might be sidelined but the truth is that everyone cannot get their cards now especially those who registered lately.

He however appealed to the members to be of good conduct during the exercise tomorrow and the subsequent ones.
Meanwhile, one of the aspirants for the Lagos House of Assembly, Hon. Ayodele Abdulhafees Oliyide, who was at the Party Secretariat, told our reporter that people felt that some party leaders wanted to use their power to favour some aspirants over others at the primary by not given out the cards as and when due.

He however said the issue was resolved with the intervention of the Local Council Chairman, whose submission about the directives from the State level he believed was pleasing.

Oliyide therefore commended the Chairman for his efforts to make sure there is violence-free Primary in Isolo.