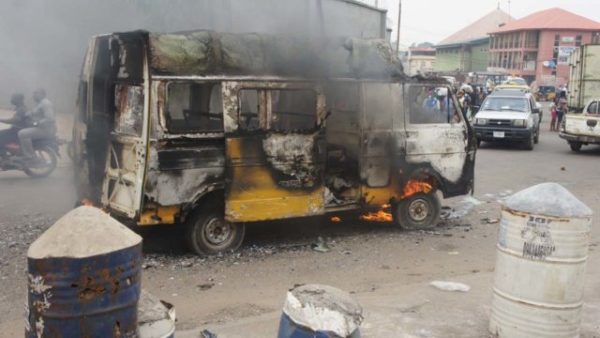 A bus conductor who stabbed a passenger to death over incessant request for N100 balance was on Tuesday set ablaze by angry mob in Lagos.

The incident took place at Five Star Bus Stop near Aswani Market, Isolo when the passenger opted to alight at the said Bus Stop and requested for his “change” but the conductor refused and allegedly threatened to beat the passenger.

According to an eyewitness who spoke to Echonews, in the cause of the argument, the conductor took a knife from a Hausa selling fruits by the roadside and stabbed the passenger who died immediately.

In retaliation, the angry passers-by, with the intention of avenging the passenger’s death, attacked the conductor and set him ablaze.

It was gathered that the driver had took to his heel at the instance of the event.

The incident became fiercer as three other yellow buses were set on fire.