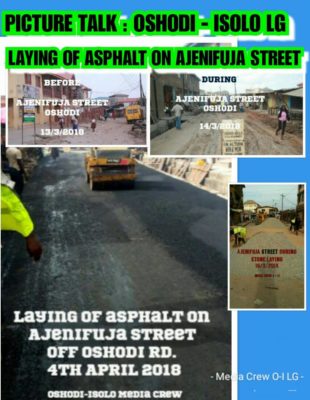 In keeping the vision of the Lagos State Governor, Akinwunmi Ambode to transform Oshodi as one of the key city centers of the state to reflect the megacity status, Ajenifuja Street, off Oshodi road has worn a new look as asphalt was laid on it after grading and other processes of road construction had followed.

The construction process, which commenced on March 14th, 2018, was championed by the Oshodi-Isolo Local Government Chairman, Hon. Bolaji Muse Ariyoh who alongside his cabinet members, party leaders and elders inspected the road project during construction today.

During the road inspection process, Ariyoh told the residents that what they saw was part of democracy dividends, adding that the Lagos state government and Oshodi-Isolo local government had been doing greatly in the aspect of infrastructural development while promising to do more for the residents of the state.

He said, “Great leaders don’t make noise on their works and achievements rather; the achievements make noise for them. We are focused and shall fulfill our electoral promises to our people.

“Today, the people of Ajenifuja are enjoying the dividend of democracy as their environment wears a new look to depict the vision of His Excellency, Governor Ambode within Oshodi axis.”

Showing their appreciation, the residents of the environment were cheering the local council boss over the construction of the street which was near completion, saying dust and problem of muddy street during rainy days would be over.