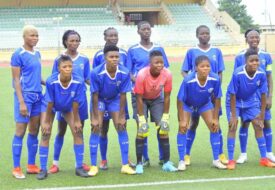 The Lagos Landladies seal a semi-final place after thrashing Royal Queens 5-0 in the quarter final of the Aiteo Cup in Akure Township Stadium, Akure.

In the early stages of the match, FC Robo Queens couldn’t find their feet in the game as Royal Queens tamed the Lagos Landladies.

It took a brilliant header from FC Robo Queens holding midfielder, Esther Adeboye to open the lead in the match.

The goal gave FC Robo Queens the needed momentum in the game as they dominated proceedings and a fantastic finish from Gift Monday from a precise assist from Rukayat Oladiti doubled the lead of the Lagos Landladies in the first half.

In the second half, Royal Queens had some chances which came their way but they couldn’t convert them and the closest they had to FC Robo Queens goal area was a one on one with the goalkeeper, which was saved by the intelligent Bukola Adegbite.

Gift Monday converted a penalty in the 60th minute to grab a brace in the game as Opeyemi Ajakaiye was hacked down in the penalty area.

Bullish and clinical striker, Taiwo Lawal scored a sumptuous goal with a well taken shot which went straight to the back of the net to record the 4th goal of the match.

Captain, Folashade Ijamilusi put the icing on the cake with a great finish in the 83rd minute as the Lagos Landladies record a great win and advanced to the semi-final of the Aiteo Federation Cup and will face Delta Queens.