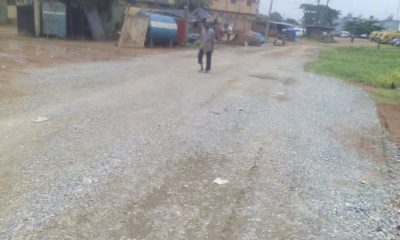 The residents of to Agbonmagbe street have lauded the Chairman of Ejigbo Local Council Development Area (LCDA), Hon. Monsurudeen Oloyede Bello Obe for the rehabilitation of their long abandoned deplorable road, which they said would enhance day-to-day activities.

The residents claimed that the gesture is an additional development in Ejigbo, particularly the area which was an eyesore, hampering smooth movement of both motors and pedestrians prior to the rehabilitation.

Speaking to Echonews, one of the overseers of the modification exercise, Engineer Olukunle Daniel, declared that the road was in a very bad state, and that  this has pressed the Ejigbo council to deem it fit to put it in a more motorable condition.

Daniel stated that the residents, among whom is the Chairman of Ejigbo LCDA himself, have earlier shown their disgruntlement as regards the situation of the road which got them overwhelmed.

“Before the repairing process came in, this road was in a bad state. The council had the thought of making it motorable for the people around this area which also include the Chairman of the council, Honourable Monsuru Bello.

“The exercise has seen the use of slater which has been used in leveling the road and it’s close to completion.

“It’s not a construction really; the exercise is just aimed at making the road more motorable for its users.”

Daniel, who doubles as one of the staff members at the Ejigbo Secretariat told Echonews that the council has singlehandedly put in place the exercise with the intention of giving back in term of the democracy dividends to the community.

He however urged motorists and pedestrians who would be plying the road after its completion to have maintenance habit so as to enjoy the road before it’s full construction.

Some residents in the area hinted that it was a welcome idea by the council boss but craved for its construction being one of the vital roads in the community that links to the station.

Abisade Remilekun, a trader in the community also eulogized the the local council boss for the work as she clamored for the real construction of the road so as to meet the needs of the people in the area.

“I want to thank Obe for this. He is one of us here in Fadu ward and he deserves our praises. We all know how it’s been [the road] before now and we think it’s better than before.

In like terms, the tributes continued from other respondents which include Tosin Oguntade who appreciated the chairman for the road rehabilitation not only in Agbonmagbe but also in other areas in the community.

He highlighted other roads being completed and the ones under construction and in reiteration of the utterances by Remilekun, who also  made request for its full construction.

“Now am happy that I and others can move my car in this vicinity. It’s a must to show appreciation to Honourable Bello for all he has done in this early time of his administration. We’ve seen roads commissioned and also he has touched other areas here in the council.

“I appreciate all these and I request he construct a better road here, considering it’s the ward he resides.”