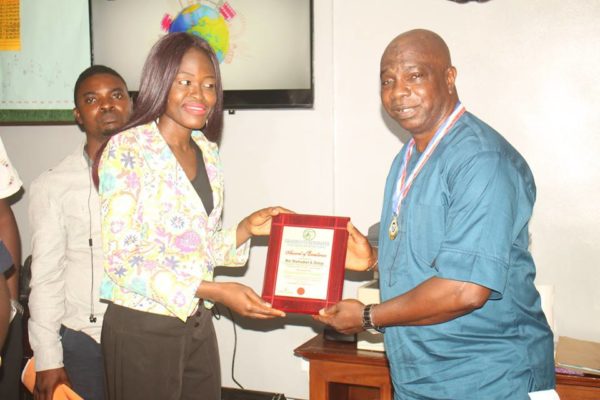 The award tagged: ‘Diligence Service To Humanity’ award was bestowed on Olaleye by the Grassroots Newspaper Publishers Network (GNPN) for his excellent service delivery and good governance to Isolo LCDA. The GNPN which is a conglomeration of grassroots newspapers publishers across the country stated that it honoured Olaleye following a close and careful monitoring of his administration’s programme and projects which have impacted positively on the lives of residents and stakeholders of Isolo council area. In his remark at the award presentation held on Wednesday November 28th 2018 at the Executive Chairman’s office, the Public Relations Officer (PRO) of GNPN, Abiagom Ike Philip, said the association was compelled to honour the council boss after verifying the projects and programmes executed by the council boss since his assumption of duties in July 2017. “At our last conference held in October this year in Abuja, our association was moved to honour you after many people attested to the fact that you have really done well. Hence, we are giving you this award to encourage you to do more,” says GNPN image-maker. The  Council Boss expressed his appreciation to the delegation for recognising his contribution to the growth and development of Isolo LCDA, promising not to rest on his oars. The award came on the heels of Olaleye’s emergence as the Overall Best Local Government Chairman in Lagos State in an award organised by Media Minds Communications Limited held on November 8th 2018 at Airport Hotel, Lagos.