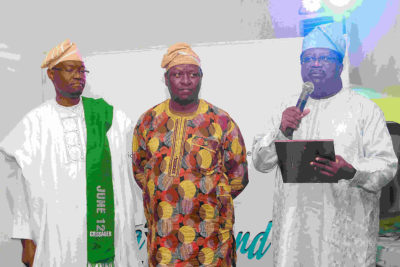 Media practioners have showered encomium and commendations on the Lagos State Commissioner for Information and Strategy, Hon. Kehinde Bamigbetan, for initiating and supporting the formation of the Association of Practioners of Community Media (APCOM), an association that caters for the community media practioners. 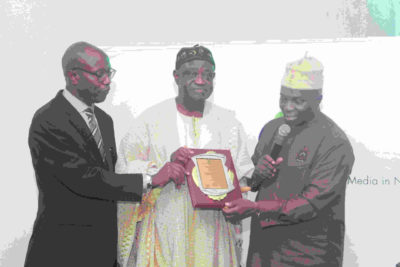 Bamigbetan, who was given a meritorious award by the association at its Gala and Award Evening in Ikeja, was said to have been the strength of the association since its formation.

The association was formed with his support when he was Special Adviser to Governor Akinwunmi Ambode on Community and Communication.

Speaking at the event, the Vice President of the Association, Odion Aleobua, informed that the award was put together to celebrate great people who have contributed greatly to the media industry in Nigeria.

The Keynote speaker, Akogun Gani Balogun, said Bamigbetan has shown great commitment to the growth and development of community media. 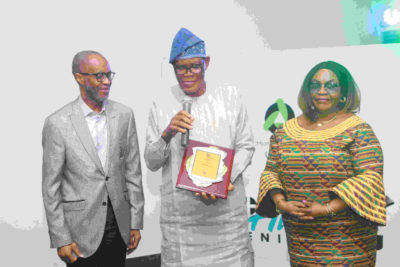 He stated, “The commissioner, when he was SA C&C, had really shown commitment to the growth and development of community media. But for two reasons, one is that you cannot get your message across unless you are talking to people in their own language.

“We are not really talking about using Yoruba, Hausa or Igbo language but things they understand, things they pass through. Break it down to their level of understanding. For instance they don’t care whether you are building road 5kilometers away, their concern is about where are they getting their own roads, power source, water. But if things you are telling them are stories that are not relevant to their own area, then you are running to trouble.

“Having said that, I think this is the right time to give awards to the people who are committed to working with the grassroots and community media.”

He informed that the role of community media could not be overlooked as they are the ones that provide solution that could not be got at the national level, adding that they have significant roles to play in the coming election.

Also speaking, the APCOM Public Relations Officer, Chinedu Nwandu, said association deemed it necessary to appreciate the commissioner for his role in upholding the association.

“The award is a way of saying thank you to the person that brought us together because in the past, someone like me has been in the business for over ten years but nobody recognized us not until this government set in and asked that all community media should come together. 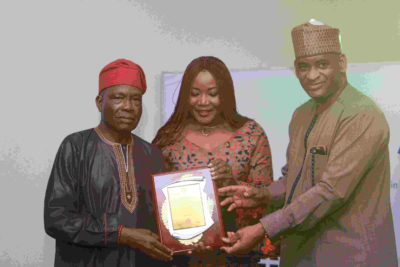 “Of the truth, some of my new colleagues I never knew them before. But it took hon. Kehinde Bamigbetan, then the SA on Community and Communication to bring us together to begin to fraternize and from that fraternity; we thought it wise to say it is good enough to begin to function as a family, to function as an umbrella and as a body. That is why eight people who think alike came together the steer this noble idea.”

One of the awardees, Prince Ganny Awobajo, who said he felt proud that APCOM has come to stay, also appreciated Bamigbetan for bringing community media practioners under one umbrella.

Responding, Bamigbetan, the Publisher of Echonews Newspaper, stated that community media has been a vital weapon that bridge the gap between the poor and the rich as well as between the elite and the grassroots dwellers.

“Lagos state for example is a large state, you may have nation medium addressing it one way but a paper in Ajeromi will use pidgin possibly, a paper in Badagry will use Egun. So, in terms of efficiency in dissemination, the community media is much more effective.

“Take Lagos state for instance, the last time was 1992, you can imaging the exponential growth of the population since then. So it the community media that can bring these gaps out so that INEC would know that actually a lot of people are going to be disenfranchised unless they give them polling booths. So these are the areas where community media can participate and ensure their vote count and their votes are counted.”

The Publisher of Oriwu Sun Newspaper, Alhaji Monzor Olowosago, who emphasized that community paper is a paper for the grassroots, believed that it is easy to achieve success in publishing a community paper which he said has become a mainstay in the media industry.

He maintained that community paper is now in vogue as people now tilt towards it rather than national dailies because of proximity of the stories in the community papers.

The Group Managing Director, CMC Connect, Yomi Badejo Okusanya, said he was glad to see the coming up of another form of media which is community media besides digital and social media.

However, other publishers were also charged to strive hard to achieve success in the media industry.