2019 Fed House of Reps: I do not step down for anyone, I remain people’s choice – Anibaba 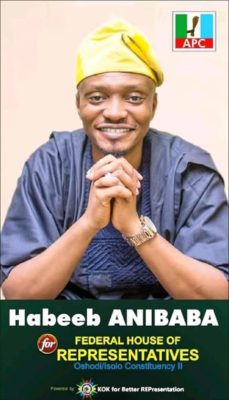 An aspirant for Oshodi-Isolo Constituency II seat at the Federal House of Representatives under the platform of All Progressive Congress (APC), Hon. Habeeb Anibaba, has debunked the rumour doctors by a factional group on social media that he has stepped down for another aspirant, saying he remains the choise of the people in the constituency.

Anibaba said the rumour was a mere gimmick to confuse the electorate during the Primary that will hold today.

He also said that it was false statement that the party National Leader, Asiwaju Bola Ahmed Tinubu, has endorsed the said aspirant, noting that the national leader did not endorsed the aspirant over others as he claimed.

He therefore therefore told to the party members not to dance to the tune of such aspirant on his rumour to destabilize the process of the primary election.

Anibaba appealed to every eligible party member to cast their votes for him as a trusted and dependable aspirant to represent the party during the general election in 2019.