The Nigeria U17 Women’s team, Flamingos recently made history as the became the first African country to win a bronze medal at the FIFA U17 Women’s World Cup.

The feat didn’t come without hard work and perserverance from the squad as they made history. 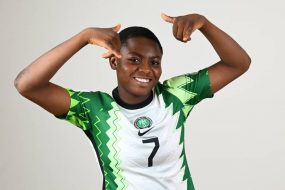 Speaking to ECHONEWS, one of the rising stars of the tournament Amina Bello said she was happy scoring in the world cup and admitted that the game against USA was her toughest in the tournament.

Amina Bello who can play at any position in the attacking line scored 2 goals and made 3 assists in the world cup added that Coach Bankole Olowookere helps them grow, a very disciplined coach who loves his players to play according to instructions and Rasheedat Ajibade remains her role model.

“I will like to appreciate God almighty for giving me the opportunity to be able to make the team list for the FIFA U17 Women’s World Cup because if not for him, I will not be there.

“I feel so happy and excited going to the world cup for the first time and scoring a goal, my joy knew no bound as at that moment.

“USA was my toughest opponent in the world cup, because it was a very tough game and we were able to beat them through penalty shootout.

“Winning the bronze medal was a joyous moment for me, I was very happy, I was like thank you Jesus for making this happen, even though we were not able to make it to the final, we were still able to win the bronze medal and broke a jinx.

“My favorite team is Chelsea Ladies because that’s the team I look up to and I wish to play there one day, Rasheedat Ajibade remains my role model and a player I look up to.

“Coach Bankole Olowookere is a very disciplined coach, he loves players that plays to instructions.